Whitney Museum works demonstrate the power and effectiveness of art when it chronicles popular culture. 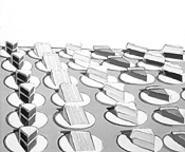 The grainy 8 mm home movie shot by Abe Zapruder on November 22, 1963, has insinuated itself into the American consciousness. It's been analyzed from beginning to end and, by now, practically everyone has seen the President's head explode in frame 313. The clip, strangely enough, has even taken on a detached life of its own — John F. Kennedy didn't merely die at 1 p.m., he died in frame 313. It's hard to escape the conclusion that Zapruder's film, in the imaginations of many, has become more real than the eyewitness reports of all of the other people in Dealy Plaza put together.

A few frames of the Zapruder film appear alongside images of Robert Kennedy, Janis Joplin, and Martin Luther King Jr. in "Signs," a 1970 color silkscreen print by Robert Rauschenberg. The Rauschenberg print, the artist's visual summation of the '60s, is part of a resplendent new show at the Cleveland Center for Contemporary Art called Pop Impact! From Johns to Warhol: Selections From the Whitney Museum of American Art.

Pop art (the phrase evokes the term "popular," the fizz in soda pop, and the "snap, crackle, pop" of Kellogg's Rice Krispies) was considered shocking and tasteless by some when, during its inception in the late '50s and early '60s, it reveled in the common visual imagery of the American scene — everything from celebrities to soup cans to pieces of pie arranged on a lunch counter.

It has had staying power, though, partly because people are still trying to figure out whether Warhol and company were presenting an optimistic or a pessimistic view of the culture. Were these artists social critics or vulgarians who lapped up the imagery spoon-fed to them by the mass media? This exhibit, co-curated by Jill Snyder, executive director at CCCA, and Beth Venn of the Whitney, and consisting of more than thirty works from the New York museum's permanent collection, suggests that both points of view are true.

Although Zapruder's film appears to tell us the whole story of Kennedy's assassination, it really just leaves it open for further investigation. That's what pop art does: It takes a well-known image and opens it up for further scrutiny. Artists like Andy Warhol, Claes Oldenburg, and Wayne Thiebaud, by magnifying Campbell's soup cans, ice bags, and slices of lemon meringue pie arrayed on a cafeteria counter, were not merely freezing such objects into an aesthetically pleasing form. More importantly, they were suggesting that, by making something larger and by repeating it, one could nudge viewers into reassessing the images that they saw every day on TV and billboards.

Even as they chose immediately identifiable mass-media images as their subject matter, pop artists encouraged viewers to step back and critically examine. Without metaphysical musings or any of the other trappings that had recently "infected" the work of abstract expressionists like Jackson Pollock and Willem De Kooning, pop artists like Oldenburg (whose enormous two-story ice bag at the exhibit inflates and deflates with the help of a motor) celebrated the expressive potential of common images while they commented on the culture from which they came.

Since President Kennedy's assassination exerted such a strong hold over the American public's imagination during the '60s, it isn't surprising that Warhol chose to examine it in one of his works. "Flash — November 22, 1963" is a portfolio consisting of ten screenprints. Pictures of Kennedy's face are interspersed with photos of Oswald and the Schoolbook Depository Building. Some of the screens consist of reporter Philip Greer's wire bulletins concerning the events of that day and the three that followed. Warhol makes no pretense at Warren Report thoroughness. Nor does he offer an opinion about the lone gunman theory or about what might have happened on the grassy knoll. Instead, Warhol does the unthinkable: He equalizes Kennedy and Oswald. The images of both men are swathed in primary colors like red and orange, and are accompanied by clapboards, those guillotine-like objects that film directors use to announce the beginning of a scene. President and assassin were both celebrities, Warhol seems to say, only one just happened to be the leader of the free world.

One of Greer's bulletins, given the context, appears to support Warhol's connection: "Lee Harvey Oswald, accused slayer of President Kennedy, died today at Parkland Memorial Hospital, where the late President was pronounced dead two days ago." This provocative work adopts the coercive strategies of the mass media in order to raise doubts about them.

So, too, James Rosenquist's billboard-sized work called "U-Haul-It," which he executed in 1967. Rosenquist, before he became one of the most well-known pop artists, was actually a billboard painter. There is nothing functional about "U-Haul-It," though. It's an enormous three-paneled work that, from left to right, consists of a bright yellow pat of butter in a frying pan, a bunch of car bodies in a factory suffused in orange light, and a purely abstract combination of greens, intense reds, and some ropy white veins that intersect them. Each of these rectangular panels is a different size, so that the temptation to view these images as part of one continuous space is discouraged. The sheer size of that pat of butter — as large as the several autos in the next panel — disturbs.

On some level, you can't help but search for some connection between the images. One lives with these objects every day, and they have no right to now appear so strange. Rosenquist's knowing play on perception is clever. It points to our need to iron out discrepancies, so that we can make sense of our surroundings. The artist appears to discourage thought (all that garish coloring), but he's actually welcoming it, because he's created a work that provokes viewers to critically reexamine the things that surround them.

Thiebaud, like Rosenquist, came from a commercial art background, but unlike his colleague's slick surfaces, which looked as lacquer-smooth as any billboard, Thiebaud handled paint sensuously. His thick brushwork in works like the 1963 "Pie Counter" mimics the sugary, frosting-laden chocolate cakes and lemon meringue pies that are lined up for consumption. The ingenious touch here is that not only the cakes and pies but the counter and the wall in the background get this rich painterly treatment. The whole space is charged with the grandeur of pastry (not the grandeur of God, as in the Gerard Manley Hopkins poem). It's all delivered with the deadpan professionalism of a seasoned comic. For a moment, though, you almost forget that there is more to lunch than dessert.

Tom Wesselmann's "Great American Nude #57" is arrayed for the viewer like Thiebaud's cakes and pies. The figure is faceless, save for a pair of sensuous lips. Wesselmann echoes the shape of her breasts in two oranges on a nearby table. By so garishly emphasizing lips and breasts, and by creating a series of these works, Wesselmann offers a sardonic view of the ad industry, which panders to depersonalized desire. Like many other pop artists, when he criticizes, he does so as an insider — by using the same tools and methods as the people he condemns.

The potential problem, of course, is that some viewers might not catch the difference. It's hard to deny that a scantily clad woman in a beer ad is designed to stimulate sales of that product. However, it's more difficult to sneak across the notion that one is using a scantily clad — or nude — woman to criticize the people who use scantily clad women to sell products. In fact, like the Zapruder film, pop art is so immediately striking and has so much cultural baggage attached to it that it has attained a life of its own.

Visiting this fine new exhibit is a great way to experience the most controversial and explosive art movement in recent history. Here, in these thirty-odd works, is the essence of our culture. Pop art is alive and relevant, and it is a powerful chronicler of the modern American experience.