Don't let his looks fool you: Clay Aiken's a simmering pot of trouble. 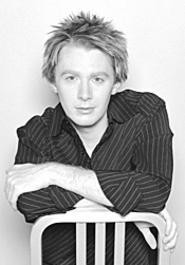 At first glance, Clay Aiken seems innocuous enough. Thin and boyish, the American Idol crooner looks like a cross between Thom Yorke and Opie Taylor. A native of North Carolina, he's all Southern charm, forever donning a goofy grin like an infant who just passed gas. Aiken's flaws are part of his appeal, with ears big enough to hear what you're thinking and a forehead that could accommodate a Browns scrimmage.

But don't be fooled. Clay's big green eyes are watching you. All the time. Even right now. Sure, his chart-topping hit, "Invisible," may seem like TRL fluff, the kind of soft rock minted exclusively for dentists' offices and WB dramas. But in reality, it's a chilling stalker anthem that should have you looking over your shoulder for leering redheads humming Neil Sedaka tunes.

Stalker anthems have been a fixture of popular music for decades. The Carpenters' "Superstar," about lust for a former fling, was one of the most disconcerting hits of the '70s, and the Police's "Every Breath You Take" validated creepy dudes throughout most of the '80s and beyond. Aiken's only the latest among them -- though when mail-carrier geekitude mixes with fleeting stardom, the results can be even more volatile.

How unsettling is it? Let's take it from the top:

What are you doing tonight?

Clay asks the question innocently enough. Then he starts getting all Swimfan on your ass.

I wish I could be a fly on your wall. Are you really alone?

Nice. Chicks dig it when guys wistfully liken themselves to insects whose best friends are cow turds. The only thing worse is when a guy starts rambling about his voyeuristic fantasies. Oh, wait -- Clay does that too.

If I was invisible, then I could just watch you in your room.

And do what? On second thought, let's not go there. It takes no more than a Doublemint commercial to arouse the average man, so we can only imagine what ol' Clay'd be up to.

If I was invisible, I'd make you mine tonight.

Geez, guy -- invisibility doesn't help you, if you can't keep the panting in check.

I saw your face in the crowd

I called out your name

You don't hear a sound.

Okay, time to call in the expert. According to guidelines established by stalking guru Dr. Michael Zona, a psychologist at the Southern California School of Medicine, there are four types of stalkers. Clay fits disconcertingly into the Love Obsessional category: That's the one who develops his infatuation from afar, eventually subscribing to the false notion that the object of his affection would agree to a relationship under the right circumstances. Clay's words here allude to as much. As the chorus ends, he begins to act out his pathology:

I keep tracing your steps

But you don't even see me

Even when I'm screaming

Baby, you don't hear me

According to Dr. J. Reid Meloy's Psychology of Stalking, Aiken's growing obsession with the object of his desire follows the traditional progression of stalking. First, a crush forms, then contact is attempted fruitlessly, and finally feelings of rejection lead to escalating frustration and narcissism.

I am nothing without you

Just a shadow passing through . . .

Right about now, it's restraining-order time. Clay has come to define himself through his would-be lover. When such passionate feelings aren't mutual, the stalker's self-image is shattered, and disaster often follows -- in this case, a full-length album of lame-ass pop and an accompanying tour. We recommend closing your blinds, turning off the radio, and staying away from your local arena. There's no telling what this lovelorn loon is capable of.