No Doubt masters the formula for fun, high-fashion rock and roll. 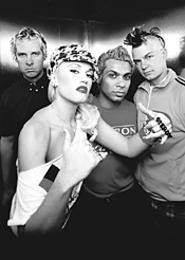 Perhaps more detail is in order.

First half of the equation: A penchant for cunning, clever musical and image-conscious evolution. We're dealing, after all, with well-tanned So-Cal kids who formed in the mid-'80s and tirelessly honed their craft through the early '90s, before blowing up in the mid-'90s with a mix of early '80s new wave and mid-'90s ska punk. In the late '90s, they endured a midlife crisis; now they stay relevant in the early 2000s by co-opting Jamaican dub rhythms from the '70s and partying like it's 1999.

Guitarist Tom Dumont is comfortable enough with his manhood to acknowledge both the yin and the yang -- the dual essences of the No Doubt Theorem.

"Gwen's kind of our great celebrity person -- maybe her being a female, I don't know," Dumont offers. (No shit, Tom.) "But we definitely didn't stick to just doing the ska-punk thing. It just seems healthier to explore other things. On our website, there's a certain number of fans that just want us to play ska punk or whatever you call it. We all certainly have an affection for that stuff, but at this point, it just felt good to keep changing things up and trying new things."

Perhaps a classical art reference is in order here.

"We're not great artists, and we're not a really important musical band anyway, but think about Picasso. If you know anything about his art, he completely flipped his style about four or five times. His early work is, like, one thing, and then he's got the weird shit that he does. Throughout his life, he just kept doing completely different things, completely abandoning what he'd done in the past, and I think it felt really good to know somebody else did it. If we wanna come out and do show tunes on the next album, it's cool, you know? It would certainly be really boring if we just did what the kids on the Internet told us."

Dumont's got a point -- No Doubt 2000 (and beyond!) is perhaps one of the great rock band reinventions of our time. The band's fifth full-length, Rock Steady, packs a gleeful, overcaffeinated dancehall punch, dressing up those trademark ska-punk rhythms in every studio-generated color scheme you can imagine. This can't possibly be the same driving, vaguely new-wave alterna-rock band that bombed us back in '95 with Tragic Kingdom, a record with two immortal (like it or not) songs to its credit: "Just a Girl" (the rockin', stage-divin' call to arms) and "Don't Speak" (the cigarette-lighter-flippin' Mother of All Ballads).

The quartet's peers probably can't believe it either -- like-minded outfits like Goldfinger, Face to Face, Reel Big Fish, and even the beloved Mighty Mighty Bosstones have all struggled to turn their late-20th-century sounds into early 21st-century success. Hasn't worked.

So how did No Doubt do it? There's even a sophomore slump to contend with: Kingdom's follow-up, Return of Saturn, was a solid but very moody quasi-menopausal sort of affair, with staid VH1-worthy pop tunes and Stefani's wobbly, melodramatic show-tune-style vocals obsessing over getting older and having kids and leading "a simple kind of life." Get yer study hall out of our recess, Gwen.

From start to finish, Rock Steady does precisely that -- even if you find it knuckleheaded and bombastically vacuous, there's no denying its worth as a flame-throwing party record.

Considering every producer known to man had a crack at it, it'd better be. "Hella Good" (produced by the Neptunes, though finished off by Nellee Hooper of Massive Attack repute) rides an obscene synth riff. "Hey Baby"(reggae demi-gods Sly and Robbie) delivers crunktastic West Coast hip-hop without the rapping. "Making Out" (William Orbit) is kicky disco. "Don't Let Me Down" (Ric Ocasek) is driving new wave. Prince shows up to harmonize eerily with himself on "Waiting Room" (sadly, not a Fugazi cover). Cuts produced by Dr. Dre and Timbaland didn't even make the album.

Dumont: "We're just not the kind of band that stands still, even within an album. We're so unfocused and so all-over-the-place musically."

Ah, but imagewise, all we get is focus: Gwen Gwen Gwen Gwen Gwen. The band's reinvention owes as much to her high-profile extracurricular activities -- namely, duets with hip-hop princess Eve ("Let Me Blow Ya Mind") and pasty techno-whatever guru Moby ("South Side"). She is No Doubt's instant hype/cred/attention Pez dispenser. Stick to the magazines, and the No Doubt hierarchy breaks down like this:

Nah. The band has addressed this rift ad infinitum, most memorably in the "only Gwen gets to be on magazine covers" subplot of the "Don't Speak" video. Dumont has taken such hysteria in stride for years.

"We're all in our 30s, and we all take things in a pretty mature fashion," he says. "We have our role to play, and I think everyone's pretty happy with what they do in the band. It's a funny thing to talk about. When I was 12 years old, I wanted to pick up the guitar and play, and I wanted to be in a band, but I don't feel like I need to be the singer or be the famous person, you know what I mean?"