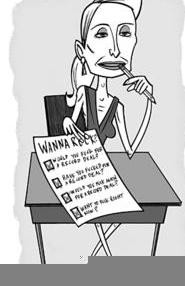 Xtina, Paris, Jessica and Beyoncé have all just released records. Are you up to speed on your pop pablum?

a) A song on Beyoncé's new album

b) Something Bill Clinton would rather just forget about

c) The title of the new Devendra Banhart record

d) The name of next week's Project Runway episode

2) Whose current or former music-mogul boyfriend would win in a fight?

a) That knob from Sum 41 that Paris blew

b) That knob Nick Lachey that Jessica humped

b) Jay-Z, who apparently "used to bag girls like Birkin bags," whatever that means

3) What do Scott Storch and Mark Ronson have in common?

a) A girl's best friend

b) Responsible for modern Top 40 radio as we know it

c) The only way Paris and Jessica could ever make music

5) Which of these movies most proves that just because you can wear a thong to the VMAs, it doesn't mean you're ready for the big screen?

a) The Pink Panther

b) Dukes of Hazzard

Match the diva with the way she got her start in showbiz:

a) Touring the Christian Youth Conference circuit (yes, it exists)

b) Performing with her then-group Girl's Tyme on Star Search