Product placement comes to adult videos...hey, watch where you put that thing! 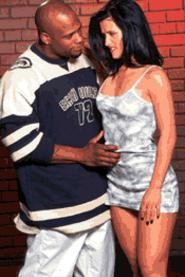 It's tempting to think there's something twisted about her tale. After all, she was a mere 18 the first time she had sex in front of a camera--for money, small change that would soon enough blossom into a pile of cash--and did so only at the insistence of her boyfriend, who had worked for months to get her to, well, open up. She swears even now that she had no idea what she was getting into the day she answered the newspaper ad looking for nude models, which turned out to be a job making all-girl amateur porn movies. To that point, she always thought of herself as "sexually inexperienced," but, she insists, she never for a moment regretted her decision. She liked getting naked in the movies, loved having sex with other women, and absolutely adored the money she could make being a fantasy.

This, despite the fact that next year, Jenteal will appear in her first non-porn film: Made, written by Swingers screenwriter-star Jon Favreau and featuring Vince Vaughan, X-Men's Famke Janssen, and Peter Falk. It won't be the first time a porn star's gone "legit": Traci Lords and Ginger Lynn went from F-movies to B-movies in the 1980s, and just last year, Jenteal's friend and frequent co-star, Kobe Tai, played a stripper in Very Bad Things, which also starred Favreau. But Jenteal insists she isn't going straight: She, in fact, hates the word transition--as in, "Are you transitioning out of porn?"--and audibly winces whenever it comes up during the course of conversation. It suggests that she's somehow ashamed of what she does for a living, and that couldn't be further from the truth.

Jenteal's not kidding herself--"I know I'll never be a Sharon Stone," she says, chuckling--but she's only too happy making her living lying down on the job. It's too profitable and--seriously--prestigious a gig to abandon, no matter how alluring the call of Hollywood. Besides, who wants to be Sharon Stone anyway?

So perhaps it's not surprising to find that Vivid Video has brought Hollywood marketing over the hills and into the San Fernando Valley: Product placement has, finally, come to the world of adult videos.

E.T. sold Reese's Pieces, Austin Powers pitched Heineken, Tom Cruise increased sales of Oakley sunglasses by 80 percent after the release of Mission: Impossible 2, and now Shelbee Myne and Jane Lixx and Charlie Angel are hawking a line of hip-hop wear in such hardcore films as The Watcher 8: Operation Voyeurism and Colorblind: A Van Fantasy, part of Vivid's no-story-all-sex Raw line. Before the clothes end up in a heap on the floor, you can clearly see the clothier's logo brandished across the chests of men and women about to go at it: Ecko Unlimited, the mark of the stud.

Unlike most traditional product-placement deals, this one costs Ecko absolutely nothing: Curtis sends the clothes to Vivid publicist Brian Gross, who conceived the idea last year, and Gross gets them in the movies, simple as that. (The line will begin showing up in Vivid's feature-length films later this year.) It is, as Gross says, a "straight-up deal": Vivid gets to be associated with one of the leading urban-wear manufacturers, and Ecko gains some exposure among the 18- to 35-year-old demographic that likes to watch movies with its pants down.

The two companies also work together during cross-promotional events: This spring, Ecko threw spring-break parties in South Padre, Texas, and South Beach, Florida, where Vivid girls showed up wearing Ecko clothes, and on August 6, the companies will throw a kick-off party at a New York City club called Fun. Vivid's flying in six of its actresses, including Kobe Tai, at no cost to Ecko. At the same time, Vivid gets free use of Ecko's so-called "street teams," otherwise known as guys who go around different cities plastering the companies' posters and stickers on barren walls. "This is," as Curtis reminds, "a deal between friends," as is another product-placement deal Vivid has with a Michigan-based company called Not-A-Beanbag.com, which sells foam-filled "poof" chairs.

"My profession is now much more socially accepted with people I meet now than when I started," Jenteal says. "I don't get the same disrespect that I got then. It seems to get better every day, and I don't think my "past' is going to haunt me or inhibit me from getting mainstream jobs. I'm a personality. My name is Jenteal, and it's always going to be Jenteal. Traci Lords might have run from her past, but I will always embrace my roots."

"We just don't like the idea of AT&T carrying hard-core pornography on its distribution system," one portfolio manager told the AP last Wednesday. AT&T Broadband's president, Daniel Somers, insists that the programming will be carried only in areas where customers demand it--which would be, oh, everywhere. Vivid's adult-vid channels are available in more than 21 million homes, including, no doubt, yours.

But Coltrane Curtis knows his alliance with Vivid is a risky one; he has heard complaints even from within his own company. But business is business, and it's a tricky thing marketing a lifestyle--you're likely to please as many as you piss off.