A smoking mom is a big name in puff films. 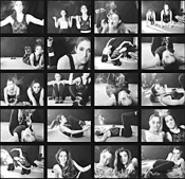 After the wild success of her 30-minute video Coughing Fit, Gina had a mild case of sophomore jitters. Director Quentin Tarantino must have had them once, too, after Reservoir Dogs tore up the silver screen and he had yet to start shooting Pulp Fiction.

Luckily for Gina, a wunderkind in the world of smoking-fetish websites, Coughing Fit II turned out to be an even bigger hit. Viewers thrilled to the sight of a big-haired woman named Holli coughing herself awake, lighting up a Marlboro, and making coffee. And they positively swooned over her scenes of uncontrollable fits of coughing, chest holding, and throat grasping. In fact, they hadn't seen such brilliant open-mouth coughing since that whiny kid on Dawson's Creek smoked his first cigarette. Bravo!

Since then, her site has risen to cult status in smoking-fetish circles -- which are apparently quite large, considering the proliferation of sites. "We consider her practically a god in our community," raves 55-year-old Jim Weidman, a retired Canadian hotel worker who keeps the green-eyed blonde with the movie-star cheekbones and her tobacco-lovin' sistahs at the top of his favorites list.

With names like "Sexy Cigarettes" and "Cigar Smoking Babes," most smoking websites are run by men who create a fastidious virtual world where women lounge around the house in full makeup and lacy French underwear, preening and pursing their lips for their own edification.

What sets smoke4you.com apart is its commitment to low production values and flannel shirts with burn holes in them. Gina's willingness to let the camera roll when a model coughs up a lung or accidentally sets her fingernail on fire really strikes a chord with that small but vocal subset of voyeurs pining for camp and spontaneity.

"Who wouldn't want a girl-next-door type who loved to party, but still had innocence and a value system?" one reviewer writes on a fetish newsgroup, commending Gina for keeping her clothes on in 420, a half-hour homage to the herb. Actually, with long pigtails and a knowing smile, she looks more like the unattainable-cheerleader type, but hey, why quibble over details?

Some of her customers are very detail-oriented, which is why Gina has about 50 different videos to her credit, each a kinky variation on the pretty-woman-inhaling obsession. They range in price from $5 for an oldie like Rings and Things, shot when Gina was still getting the hang of filming herself in her kitchen, to $150 for a custom request.

"I've been doing it so long that any smoke fetisher would know who I was, by my first name only," says Gina. "So in a really blown-up, wacked-out way, I'm like somebody."

She pays her models $100 for a 45-minute session. In the site's early days, Gina was hard-pressed to find models, so she'd just slap on a different wig and costume -- à la Cindy Sherman, without the art-school polish -- and film herself. "To make myself more interesting, I had to have many looks," she says. "I can look like a whore one minute, a little girl the next."

Weidman turns to smoking websites not for the hot cigarette action, but for the coughing. Ever since he was 10 years old and paired off with a square-dance partner with a bad cold, he's been attracted to women with a very specific cough: "I like a barking sound more than anything -- a little bit raspy and deep, right from the chest," he confides.

For that reason, he gravitates toward Gina's four-part Coughing Fit series, as well as the just-released Monica Is Sick, in which a brown-haired young woman wrapped in an afghan "shows off her cough, smokes a bit, and tries to get you sick!" Sample photos on the home page show Monica dramatically clasping her throat, applying cold compresses, and drinking orange juice as she hacks away.

Those who prefer alternative smoking devices are not left to fend for themselves. In Cigars and Grandpa's Pipes, Rose puffs and "talks about her excitement in acquiring these heirlooms." And Holli's Holders is a tribute to the Casablanca-era appurtenances.

A singer until her three-pack-a-day habit ruined her voice, the long-haired, lanky Holli is perhaps Gina's favorite model; her best performance was as a jaded hausfrau dressed in clothes from the Flashdance era.

There wasn't much time for creative development on that one, Holli recalls. "I got right out of bed -- no makeup on -- she came over, put the lights on, and we had coffee together and smoked up a storm."

The fact that Gina has to squeeze in shooting after the kids' bedtime, on a small square of living-room carpet, makes it seem all the more real. "When I'm filming, if there's a kid crying in the background, I leave it in."

Her next projects? She just wrapped up a 45-minute smoking workout video, in which she and Holli portray a couple of Jane Fonda flunkies. In one particularly MadTV-ish scene, "Holli holds a cigarette out here, and I'm doing a sit-up to get to it," she says. And with this latest cinematic foray, Gina may finally attain crossover stardom, reaching not only an audience of pervs, but women who just need a good laugh.