Two luminaries get the theatrical treatment.

Murder in Mind
Presented by Dobama's Night Kitchen at Dobama Theatre through February 10; 216-932-3396 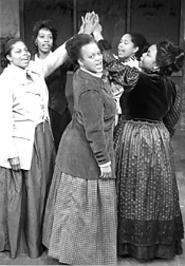 Great theater, the kind that brands our psyches, invariably results from the unfettered collision of id and inspiration. An old cynic's preoccupation with a teenage martyr led to the majestic poetry of George Bernard Shaw's Saint Joan. The fleeting image of a disappointed belle, waiting hopelessly in the moonlight for her beau, evolved into that great American passion play A Streetcar Named Desire.

On the other hand, imposed agendas, no matter how worthy, rarely lead to great art. Elizabeth I purportedly ordered Shakespeare to replant his magnificent scoundrel Falstaff into another play, causing him to cultivate his most anemic comedy. Similarly, plays conceived to promote a certain idea tend to reek of heavy didacticism, rather than humanity.

This helps explain why theaters have a hard time finding plays to produce for Black History Month. There doesn't seem to be enough substantial material beyond A Raisin in the Sun and the canon of August Wilson. And the Great Lakes Theater Festival's . . . Love, Langston does little to help matters.

Adapter/composer Loni Berry has taken works by Harlem Renaissance novelist/lyricist/poet Langston Hughes and pureed them in a musical comedy blender. The result is a revue that never honors its subject with a sense of identity. Instead, it is a gaudy, occasionally pleasing, often tacky hodgepodge that makes it difficult to discern just who Hughes was. Neither the program nor the play itself names or differentiates the individual pieces. With no helpful narrator, all but the most ardent devotees of the poet will be at a loss.

With its ersatz jazz accompaniment, the work is derivative of everything audiences have seen before. There's a relentless barrage of floozies in tacky boas, syncopated hepcats, jitterbugging Harlem barflies, and jubilating parishioners down by the river, the sum of which evokes a cross section of black extravaganzas ranging from The Hot Mikado to Ain't Misbehavin'.

Drowned by showbiz, Hughes's poetry comes across as deep-dish sentiments at a speakeasy. A line like "I've known rivers ancient as the world and older than the flow of human blood in human veins," so beautiful on paper, seems jarringly out of place.

Berry has composed some good numbers in the Duke Ellington mode, and they are well played, but none of his theatrical ideas jell. In one scene with great potential, set in a Harlem dive, the patrons relish their animal spirits till a group of white sightseers appear and make them feel self-conscious. This fascinating idea is dwelled upon but never sufficiently dramatized.

The seven-member company consists of adept singers but barely capable dancers; they can get it up for a soulful belt, but André De Shields's silver-dollar choreography defeats their two-bit feet. Melanie Watnick's costumes are ill-matched and threadbare, and Vincent Mountain's ponderous set fails to add atmosphere or excitement.

The image of Hughes himself is represented by a silhouette in an upper window, typing away. What goes on beneath the window doesn't speak of his Cleveland connections or his groundbreaking collaboration with the white Kurt Weill on the opera Street Scene. Unfortunately, . . . Love, Langston works neither as tribute nor show business.

Tazewell Thompson's Constant Star is a compelling meditation on the life of Ida B. Wells, who was born a slave but demanded to keep her seat on public transportation long before Rosa Parks. The play follows her from suffragette to publisher, contented bride, founder of the NAACP, and onetime friend of Susan B. Anthony's. The only success that seems to have eluded her grasp is the perfection of a prize-winning angel-food cake.

Playwright Thompson uses an ingenious device to steer the work away from hoary cliché: He has written the piece so that five actresses of varying ages occupy the stage at the same time, taking turns portraying Wells. This technique effectively transforms the subject's life into a dramatic rhapsody, embellished by 20 lovely spirituals. Everything from a wedding to rallies with harrowing descriptions of lynchings takes on the air of a village dance. The play's five Idas (Yolanda Davis, Ebani Edwards, Susan Hughes, Joyce Linzy, Sharron McPherson Foxx) interact with the dexterity of a heavenly choir. They each have a supple grace and implacable dignity, and manage to avoid any hint of sanctimoniousness.

With lush production values and an impeccable sense of timing, Dobama appears to have moved from Coventry to off Broadway. This is the best of what Black History Month can accomplish, presenting an inspiring life appropriately told with uplifting theater.

In horrific sync with everything from Poe to Psycho is Dobama's Night Kitchen production of Murder in Mind. Developed by four writers, it is a series of monologues charting the heinous machinations of a serial killer and the thoughts of his victims. Equally repulsive and fascinating, pretentious and riveting, it makes Silence of the Lambs look like Singin' in the Rain. Jeff Blanchard, formerly Cleveland's most raucous clown, now embodies our worst nightmares. Directed by Greg Vovos without a shred of compromise, it is indeed a bold journey into the dark recesses of the mind. This is a production so disturbing, one can debate whether it should be strewn with laurels or have a stake driven through its evil heart.