Pour Some Sigur on Me 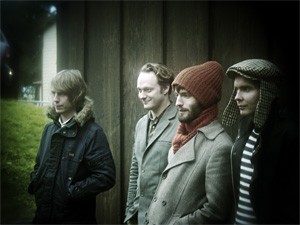 TOP PICK — Heima (XL)
Sigur Rós wrapped up its worldwide tour last year with a series of free concerts in its native Iceland (heima means home). The quartet (plus an auxiliary string section) played both electric and acoustic shows in places as varied as an old fish factory and a sheep-filled pasture. This DVD juxtaposes scenes of Iceland's serene countryside with breathtaking live performances of some of the group's most atmospheric songs.

VIDEO GAME — The Legend of Spyro: The Eternal Night (Sierra)
Our favorite pixelated dragon returns for the second installment of a trilogy filled with evil baddies, mind-bending puzzles, and temple-toppling action. Be sure to play this one on the Wii, where Spyro's new tricks — everything from complex melee attacks to fire-breathing destruction — give gamers a wrist-cramping workout.

BOOK — Star Wars: A Pop-Up Guide to the Galaxy (Scholastic)
The greatest sci-fi saga of all time wraps its 30th-anniversary celebration with this cool new book that's loaded with pics and facts. Tons of info — about Jedis, the Empire, and of course the Skywalker clan — hides behind every flap. More than three dozen 3-D pages put Darth Vader and pals right in your face.

VIDEO GAME — Super Mario Galaxy (Nintendo)
The world's most beloved video-game icon goes next-gen in a big way with this terrific Wii outing that catapults the little guy into outer space. The smart, super-fun (and challenging) levels offer unexpected thrills with every twist of the wrist. There's lots going on here (from gravity-defying jumps to cool new ways of kicking butt), making Galaxy the Wii's first must-own game. It's also one of the year's very best.

DVD — Superbad (Sony)
The '80s had Fast Times at Ridgemont High. The '90s had Dazed and Confused. This is the 00's contribution to the drunk-and-horny teen genre, and it's a winner. Co-written by Knocked Up's Seth Rogen (who plays a beer-guzzling cop), the movie follows a day in the life of two high-school friends. Raunchy (oh yes, there will be period blood), funny (the penis drawings are beyond brilliant), and ultimately touching, Superbad is the rare teen flick with both a heart and a raging boner.