The smell of barbecue will rope you in at Austin's. 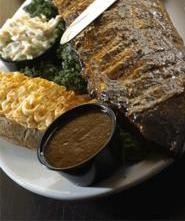 At Austin's Smokin' Steakhouse in Twinsburg, the sassiest starter isn't on the menu. It wafts through the air like smoke 'round a campfire: hazy and lazy, a sort of prairie perfume, whispering of trail dust, leather, and mesquite. Inhale those heady aromas as you John Wayne it through the doors, and your mouth begins to water in mad anticipation of the pleasures ahead.

Yessiree, aroma is the ultimate appetizer; and there are few better places to get a whiff than at this handsome suburban barbecue joint, the third and newest outpost in restaurateur Dan Campbell's campaign to cover Northeast Ohio in barbecue sauce and baked beans. (Mayfield is home to the original Austin's; the more upscale Austin's Wood Fire Grille is in Brecksville.)

Thank hickory and mesquite for those fine rustic aromas. Hickory is used for slow-smoking cuts of beef, pork, and chicken; the mesquite is for finishing off the meats on wood-fired grills. The final step in the labor-intensive process is swabbing down the grub with one of the kitchen's own sauces (a darkly intense, sweet-and-peppery Texas-style sauce or a thinner, mustard-and-vinegar-based, southern-style slather), for dishes that generally resound with primal scents and complex notes of flavor.

While the meaty ribs, steaks, pulled pork, and hickory-roasted chicken are the main attractions, the big all-day menu also includes fish, seafood, pastas, entrée-sized salads, and more than a dozen sandwiches. (Kids' menu offerings include grilled cheese, chicken fingers, and mini-servings of ribs.) Portions are ample, but not outlandish; most entrées and sandwiches come with a house salad and/or a choice of homemade sides; and a couple could easily tie on the feedbag for less than 30 bucks -- assuming they don't wash away the trail dust with too many frosty mugs of Sierra Nevada or Dortmunder Gold ($3.50).

Among the starters, the thin, crisp-crusted Carolina crab cakes may not be barbecue, but they still taste like heaven, all gussied up with corn, diced green and red pepper, and a savory blend of spices; garnishes of chile-spiked mayo and roasted red-pepper salsa add to the fun. Thick-sliced onion rings, moist and sweet inside a crunchy, golden batter, make a nice diversion too, as do the meaty chicken wings, tossed in a choice of hot, mild, or barbecue sauces and sided with blue cheese dressing.

In Texas, the menu tells us, "Barbecue means brisket," and Austin's serves it slow-smoked, thinly sliced, and accompanied by a passel of frozen but tasty shoestring fries; while the beef we sampled should have been more tender, the dark, smoky flavors were sufficient to keep one companion firmly in his saddle. Likewise, taste outscored texture in a slightly dry pulled-pork sandwich (plenty of smoked pork shoulder, tossed in a tangy barbecue sauce); next time, we'll ask for extra sauce to add some moisture. And while a slab o' hickory-smoked prime rib -- a weekend special available in 10-, 14-, and 18-ounce cuts -- didn't quite melt in our mouth, it was full of woodsy flavors and almost unbelievably juicy. On the other hand, the big baked potato that sided it was nearly as delicate and fluffy as custard. And a half-slab of meaty, perfectly trimmed baby-back ribs couldn't have been finer, with a thick char and a varnish of tongue-tingling sauce.

We did venture off the beaten path at least briefly, though, with an entrée of blackened tilapia. While they lacked the punch of the barbecue, the farm-raised filets were mild, moist, and brightly seasoned, making them a sure bet for those who avoid red meat.

Of course, one of the biggest draws of dining at Austin's is the chance to pick sides: You could settle for the crisp, coarsely shredded coleslaw or the flabby but flavorful mac & cheese, but savvy trail riders will head for the dark, buttery baked beans -- spiked with bacon, ground beef, and a haunting hint of hickory -- or the warm cinnamon apples, a sweet-tart counterpoint to the flavors of the fire.

The offerings end with a collection of homemade desserts, ranging from a simple hot fudge sundae to cool Key lime pie. Ringed in real whipped cream, an oversized wedge of pecan pie tasted predictably sweet and satisfying, while warm, homemade apple crisp was the real deal, with layer upon layer of thinly sliced Granny Smiths snuggled beneath a blanket of crisp, burnished cinnamon-sugar crumbs and a baseball-sized cap of vanilla ice cream.

So hit the trail to Twinsburg. If you forget your map, no problem: Just take a deep breath, and let your nostrils be your guide.