by Chris Miller and Cris Glaser 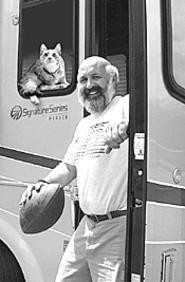 If elected President, Tailgating Party candidate Joe Cahn of New Orleans would settle congressional disputes with sudden-death overtimes. Cahn and his three-year-old running mate, Sophie the cat, are traveling to every NFL city this season in RV One to tailgate with football fans. Cahn's supporters include the Campbell Soup Company, which is donating a can of chili to a local food bank for every mile he logs between California (where he was last week) and Cleveland (he rolls into town Sunday before the Browns' game against the Eagles). "I'm the only candidate giving back," he declares. "But instead of contributions, [donate] Bush's Baked Beans or Heinz ketchup." Cahn invites tailgaters to join him between 7 a.m. and 1 p.m. at the Muni lot near Browns Stadium, 100 Alfred Lerner Way. -- Cris Glaser

Hikers at this weekend's Halloween Extravaganza will glimpse nature's spooky side. The kid-friendly strolls focus on the critters that make Halloween what it is. "[We'll] holler for the screech owl!" exclaims naturalist Sharon White. And the woods will be adorned with Halloween decorations, since it's unlikely that the holiday's winged emblem, the bat, will come out and play. "When you're in a group, there's usually a lot of noise," and bats hate crowds, says White. Participants are encouraged to wear costumes and bring flashlights. The hike happens 6:30 to 8:30 p.m. Friday and 2:30 to 4:30 p.m. Saturday at the F.A. Seiberling Naturealm, 1828 Smith Road in Akron. Admission is free for adults, $2 for kids; call 330-865-8065. -- Chris Miller

Disorder on the Court

Rubber balls smack into four walls during fast-paced matches at this weekend's Cleveland Open Handball Championships. The tournament follows U.S. Handball Association rules, which allow refs to issue technical fouls to players who argue and cuss. Three technicals, and you're disqualified. "It's hard to play," says tourney organizer Mario Dolciato. "In handball, you gotta use the other arm, and you got a small ball." The games run 5 to 10 p.m. Friday and 9 a.m. to 5 p.m. Saturday at Club Ultimate, 34650 Melinz Parkway in Eastlake. It's free to watch, $15 for novice players, and $35 for advanced competitors; call 216-443-6002. -- Cris Glaser