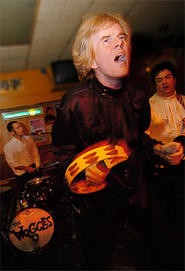 Pretenders mainwoman Chrissie Hynde, one of Rubber City's greatest rock exports, returns home this week to invest in Akron's past and future. She'll host the opening of her new upscale vegetarian coffeehouse-restaurant, VegiTerranean (21 Furnace Street). Hynde will preside over a ribbon-cutting ceremony on September 15 at 4 p.m. Later that night, she'll headline a concert at Akron's Civic Theatre (182 South Main Street).

The show will benefit the Civic, a historic building completed in 1929. With an inside modeled on a medieval Moorish castle, the elegant venue still hosts theatrical events and concerts. Hynde found inspiration there in the '60s and '70s, watching shows by B.B. King, Aretha Franklin, and Cream.

"It is an amazing place," says Hynde, who hopes the show and restaurant will help spark Akron's cultural district. "The idea [is] to bring life back to the downtown area."

Pretenders guitarist Adam Seymour will back Hynde for her set; they'll take requests. The two will likely be joined by some yet-to-be-announced celebrity friends who are also attending the restaurant's opening. Hynde personally invited some of the evening's guests, including Jerry Lee Lewis. Local organizers invited Akron bands old and new, including blues reconstructionists 15 60 75 (the Numbers Band), punkers Bizarros, melodic post-punks the Difficult, old-school all-stars Half Cleveland (featuring members of Tin Huey, the Waitresses, and Chi-Pig), blues-rock revivalists the Patrick Sweany Band, and instrumentalists If These Trees Could Talk.

"I'm sure it would have been no problem to fill up the bill with some national acts," says Trees guitarist Mike Socrates. "But it says a lot that they chose to invite out local bands. We feel honored to be able to play alongside some of them and represent our city at a show like this."

· A documentary is in the works about 107.9 the End, the Cleveland commercial radio station of record during the alt-rock era. From 1992 to 1999, the End helped bands like Barenaked Ladies get a regional foothold before going on to national success. The End of the World as We Knew It is being co-directed by University of Akron alums Michael Wendt and Jennifer Danolfo. The two have interviewed local radio personalities, fans, and members of End bands, including Sponge and Reel Big Fish. The doc is still in progress, with no release date, though a trailer and interviews are available at www.myspace.com/ 1079_the_end.

· Cleveland rapper Torrio will host hip-hop night at the Sea Level Lounge (8307 Madison Avenue) Tuesday, September 18. He'll be giving away copies of his new release, The Big Picture. After the giveaway, the disc will only be available via digital stores, including iTunes and eMusic.

· Canton's Lovedrug will host a meet-and-greet (but not play) before the Suspect Inc. show Friday, September 14 at Traffic (1296 West Sixth Street). The Radiohead-goes-emo band will spend the fall on the road with Blue October and Shiny Toy Guns. A show at Akron's Musica on Saturday, October 6 will be the Lovedrug's only Ohio live appearance for the season.