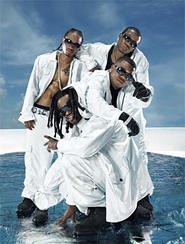 The Miami foursome of Slick 'Em, Baby Blue, Spectacular, and Pleasure earned a pair of Top 20 hits off their 2005 debut, Blueballs -- er, Bluestars. Needless to say, "Grind With Me" and "Your Body" neatly summed up their worldview and concerns. But in an effort to show they could do more than make salami references, the brothers . . . well, they basically made another Viagra pill of an album, one which again couples tuneful bedroom soul with a lengthy list of places they wanna put the ol' pepper. Remember, some folks consider this romantic -- but bring a female date to this show at your own risk.