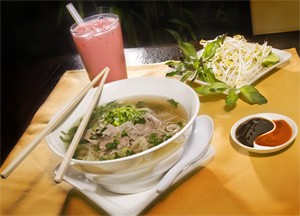 It's a familiar feeling for frequent diners: tedium, tinged by despair about what seems like the real possibility you'll expire from boredom before your server shows up with your check.

So when our dinner companion at a Saturday-night visit to downtown's Saigon slumped in her seat, moaning, "Please don't let me die this way," our giggles were tempered by the hard truth that 20 long minutes had passed with no sign of our server. Luckily, a friendly manager eventually spied our plight and helped us check out before we passed out.

But if service issues still need to be ironed out at this three-month-old restaurant — an upscale sister to Asia Town's #1 Pho — Saigon's visual impact is already smooth as silk. Nestled into a relatively small storefront on downtown's bustling East Fourth Street, the room is cozy, comfy, and contemporary, with high ceilings, a patterned wood floor, and a trio of tall stone-look columns that evoke thoughts of ancient Asian temples.

The only off note? The soundtrack of light jazz, more suited to a Beachwood dentist's office than a contemporary Asian restaurant.

Then again, when your fellow diners are wearing Indians jerseys and swilling Buds, it's clear you haven't washed up on an exotic foreign shore. That's certainly the case at Saigon, where the enormous menu — 17 apps, a dozen soups, and more than 50 mains, including a handful of vegetarian dishes — may look mysterious, but the flavors are generally familiar and fresh.

Also satisfying is a Vietnamese version of chicken noodle soup, with plump shrimp-and-pork won tons floating in a golden broth. Attack them with chopsticks and a porcelain spoon, and remember: It's not polite to not slurp.

For best effect, pair any of the soups with one of the crisp, wholesome salads — sheer sliced lotus root, perhaps, or threads of cabbage, piqued with shredded carrot, scallions, and chopped peanuts, along with three or four small, sweet, but slightly rubbery sliced shrimp. Brisk and refreshing, the moist-and-crunchy components make an ideal foil for the well-balanced dressing, bursting with sweet, tart, and salty overtones along with the high aromatics of onion and cilantro.

Then finish off this ideal meal with a glass of cool, creamy bubble tea, in flavors like papaya, mango, coconut, and strawberry.

Not everything earned such high marks, however. That included a dryish starter of marinated minced beef, wrapped inside slightly fibrous grape leaves and grilled to order. Other than a vague smokiness, it was pretty dull stuff, with the main flavor notes coming from the nuoc cham dipping sauce — a salty, peppery, sweet-tart condiment ubiquitous on Vietnamese tables.

Also unmemorable was the soggy Vietnamese-style crêpe, with a scant filling of pork, shrimp, and bean sprouts. Even more disappointing: the clay-pot shrimp — six small shellfish, simmered in "a special Vietnamese sauce" that tasted like concentrated Kikkoman. If there were flavors beyond "salty" here, we missed them.

And here's another heads-up: There is a great deal of repetition on the menu, meaning that diners who want to sample an array of cooking styles will need to read carefully. Otherwise, it's possible to end up like the table next to us, where nearly every dish turned out to be a variation on rice-noodle vermicelli.

Not that there was anything wrong with our bun cha gio, an entrée of thread-thin vermicelli topped with a pair of crisp, sliced spring rolls, along with artful arrangements of bean sprouts, julienned cucumbers, carrots, and daikon, and a sprinkling of chopped peanuts; on the side, nuoc cham served as a saucy flavor-booster. Cool, crunchy, and relentlessly wholesome, the dish would make a fine light meal for a hot summer's night.

Besides Bud, the bar features imported Asian brews like Hue (Vietnam), Singha (Thailand), and Sapporo (Japan), along with sake, a lineup of moderately priced wines (including plenty of Asian-food-friendly Rieslings and Gewürztraminers), and specialty cocktails like the Zentini ($8), a cloyingly sweet, none-too-potent concoction of green-tea liqueur, citrus vodka, and a splash of orange juice.

Among sweet endings, skip the greasy fried banana, and head for the satiny Vietnamese flan — much like Puerto Rican flan, it turns out, save for its dark, robust coffee-based sauce. Also worthwhile is the fresh-brewed French coffee, an intensely concentrated espresso with sweetened condensed milk.

It's the kind of caffeine boost that could make a diner leap to her feet and go dashing out the door — assuming, that is, she could ever get her hands on the check.