Another youth-violence drama overexerts itself in its lunge toward Art. 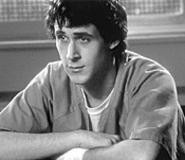 The most notable thing about The United States of Leland, a youth-violence drama from writer-director Matthew Ryan Hoge, is its earnestness. This is a film that wants to be good. It wants to mean something, it wants to move you, and it wants to ask (if not answer) some pressing moral questions. Are people basically good or bad? If terrible things happen and can't be undone, what makes life livable? Where's God? How should we see the world -- as a place where good things happen to good people, or as a condemned cesspool of misery? And if your girlfriend has been in Los Angeles for three months, is it okay to sleep with another woman?

These are the kinds of questions that have occupied poets and philosophers throughout the ages, and, like its protagonist, The United States of Leland would like very much to find a place among those lofty ranks. And that's the big, nagging problem with this movie: It's flapping its wings so desperately, in pursuit of artistic heights, that it nosedives directly into the ground. Watching The United States of Leland is like listening to a needling obsessive who can't put a plug in his self-justifying chatter: I am smart. I am probing and intellectual. I'm constructing meaning right now. Aren't I smart? Think hard. And so on.

Pearl Madison (Don Cheadle) is a juvenile-hall teacher whose students are locked up for any number of scary crimes, murder included. While he seems to regard them with admirable neutrality, he's not at all inspired -- he lets the VCR do the teaching -- until Leland Fitzgerald (Ryan Gosling) appears in his classroom. Leland is a chalk-white, apparently mild-mannered kid who hails from middle-class suburbia, yet somehow, for some reason, he knifed a retarded boy to death. Nobody can figure it out, least of all the shattered families of both victim and perpetrator. What makes it possible for a seemingly harmless boy like Leland to kill? It's a mystery, and Pearl (an aspiring novelist who wants to co-opt the story for a book) is determined to play sleuth.

The rest of the movie concerns this conflict. In illicit private conferences held in the detention-hall library, Pearl and Leland go head-to-head, with Pearl attempting to make sense of what Leland insists is nonsensical and Leland turning the tables to confront Pearl with his own dubious actions. This is the movie's frame, intended to shape the aforementioned moral questions; from here, we flash back to whatever scenes from Leland's past might bear on the present: betrayal by his drug-addicted girlfriend (the Helen Hunt-esque Jena Malone); abandonment by his famous-author father (a block of ice, played by Kevin Spacey); and interactions with both the retarded boy Leland killed (his girlfriend's brother, as it turns out) and a surrogate family in New York.

Even as The United States of Leland wants to posit the inexplicability of youth violence, its use of flashbacks suggests direct causality between events in Leland's life and the murder. If we're seeking an answer for x, these flashbacks say, we go to scene y. This structure places an undue burden on the scenes from the past; every time we return to a moment in Leland's life, it's far too loaded to work as a scene unto itself. Instead, we're so clearly meant to parse it for explanation that we can't experience it as drama, only as exposition. Here as elsewhere, writer-director Hoge undermines his own project. It seems that he can't find enough ways to explain to us that his film is inexplicable, and the result is not the complex drama he seeks, but mere didacticism.

At the same time, we see each character for so short a time that it's hard to get a purchase on -- and therefore to care about -- any of them. The press notes describe Leland as "smart" and "quiet," but the movie never bothers to establish either of those things; instead, he's a creepily flat cipher, almost spectral, and impossible to know. The unnerving result is to sap the conflict of its urgency; we're supposed to care about nothing more than why this kid did what he did, but it's actually very hard to do that. He's barely there, therefore capable of pretty much anything and nothing all at once. Other characters (Leland's mother, the victim's parents) are essentially paper dolls, stand-ins for grief, anger, and bewilderment.

Worse, the film doesn't seem to know that its one real character -- teacher-writer-ersatz counselor Pearl -- is despicable. The movie presents him as "rounded" (an okay guy, basically, with flaws), but what does he have to recommend him? He's a teacher who leaves his prison classroom in the hands of unqualified personnel while he secures verboten private sessions with one inmate, pretending to offer counsel in order to elicit a story for a novel. Even if Pearl weren't writing a book, taking it upon oneself (sans training of any kind) to counsel a troubled youth is arrogant at best and dangerous at worst. Then he cheats on his girlfriend and doesn't tell her. Yuck.

As a self-consciously literary film, The United States of Leland favors a few repeated catch phrases, notions it encourages us to consider alongside the questions it poses. One of these phrases is "The whole is greater than the sum of its parts"; another is "Everything is going to be okay." It's tempting to invite the film to listen to its own dogma; to create, first of all, a work which is more than a puzzle of interlocking pieces that all say essentially the same thing, and which rises to something, rather than hammering itself into the ground -- and, after that, to take a break from the relentless, desperate exertion that makes the film a chore to watch. In short, things really are going to be okay. There's just no need to try so hard.

By the end of The United States of Leland, nearly every character has acknowledged that he or she has made mistakes; the movie, by implication, asks us to forgive. But it's hard to forgive people you neither know nor like, just as it's difficult to forgive the film for failing to trust its audience.