Dance troupe's Cactus is a pointed tribute to the Southwest. 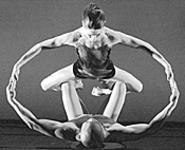 Winter may be in full swing, but a hot, dry theatrical oasis will appear at the State Theatre on Friday, when Momix Dance Theater performs Opus Cactus, a collection of surreal vignettes in which dancers suggest the flora and fauna of the American Southwest. "It's not necessarily an exact representation of nature," explains dancer Suzanne Lampl. "That's one of the coolest things about Momix. The audience is free to interpret things as they come."

Choreographer Moses Pendleton, who founded the troupe 20 years ago, calls Opus Cactus a meditation on what one might experience during a trip through the desert. It's set to an eclectic soundtrack that spans Native American and Australian Aboriginal songs, Brian Eno, and Bach. Bright, elaborate costumes enhance visual allusions to Gila monsters, cactus wrens, and tumbleweeds.

And the identities of individual dancers do not matter as much as the overall impression in the piece, says Lampl. "We're all part of a team creating a whole puzzle. We're each just one mechanism, one bolt in the engine, and we can't tell from the stage we're in a Mercedes." Show time is 8 p.m. at the State Theatre, 1519 Euclid Avenue. Tickets are $20 to $45; call 216-241-6000. -- Zachary Lewis

Color Their World
Space-themed punks land at the Beachland.

Color-coded and dressed in Ninja outfits onstage, the members of Peelander-Z claim they're from the Z-area of Peelander Planet. It's where cars crash into Frisbees, energy bars are made from spit, and guitars are called "six pretty strings," they claim. It's also where the Tokyo-born rockers practiced their "Japanese kung-fu action-comic punk" before crossing the Pacific to New York in 1995. One critic dubbed the trio's second album, P-Bone Steak, "pandemonium on tape, like a train wreck" (we think that's a compliment). The guys even appeared on Spike TV's campy hit MXC: Most Extreme Elimination Challenge as celebrity contestants. "If you think too much, you cannot see," singer Peelander-Yellow (aka Kengoswee) once mused. "If you feel, you can see." Peelander-Z performs at 9 p.m. Friday at the Beachland Tavern, 15711 Waterloo Road. Tickets are $6; call 216-383-1124. -- Cris Glaser

Case Western Reserve University's celebrating the 30th anniversary of its Science Fiction Marathon this weekend, and among the 15 films screening for more than 24 hours (starting Friday night) are genre classics (Alien, the original Planet of the Apes), cult classics (Soylent Green, Repo Man), spoofs (The Lost Skeleton of Cadavra, Abbott and Costello Meet Frankenstein), and movies that aren't that good but fans adore anyway (Star Trek: Insurrection, pictured). Folks who have attended more than 25 marathons will be honored for their unwavering appreciation of the sedentary arts. The first flick (The Day After Tomorrow) begins at 8 p.m. at CWRU's Strosacker Auditorium, 2180 Adelbert Road. Admission is $25. Visit films.cwru.edu/sfmarathon30 for a complete schedule. -- Michael Gallucci

As head of I.R.S. Records, Miles Copeland was responsible for some of the '80s' coolest acts: R.E.M., Let's Active, the Go-Go's. He also managed the Police (brother Stewart was the drummer). He talks music at 7 p.m. Wednesday at the Rock and Roll Hall of Fame (1 Key Plaza) as part of the series From Songwriters to Soundmen: The People Behind the Hits. Tickets are $5; call 216-241-5555. -- Michael Gallucci