How David Sanborn became the most visible alto saxman since Charlie Parker. 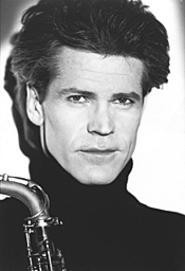 David Sanborn has crossed over musical styles enough times to give psychic John Edward head spins. The alto saxophonist has performed as sideman to icons of jazz, pop, blues, and rock, and his own records have won Grammys in three different genres. Simply put, over the past 30-odd years, Sanborn has expanded the arena in which the saxophone is heard.

He was onstage at Woodstock with the Paul Butterfield Blues Band. He hosted the Lorne Michaels-produced program Night Music, which pulled in an assortment of intriguing musical guests, from Sonny Rollins and Richard Thompson to Sun Ra and NRBQ. The show also gave New York post-punk legends Sonic Youth their network television debut.

Sanborn has played onstage with Miles Davis, Stevie Wonder, the Eagles, the Rolling Stones, Eric Clapton, and Bruce Springsteen (during the Boss's rendition of "Glory Days," which ended David Letterman's tenure on NBC). He's appeared on albums by all those artists and more, including Steely Dan, Elton John, Aretha Franklin, Billy Joel, and Roger Waters. The sax on James Taylor's "How Sweet It Is" is Sanborn's. So is the solo on David Bowie's "Young Americans."

But the privilege of working with musical legends is not lost on the unassuming 58-year-old.

"I've been a fan and friend of Eric Clapton's for a while, so that was always great," Sanborn says of his past collaborations with the legendary guitarist. "Sometimes, you know, it's like you're friends with somebody, so you hang out and you rehearse and all that stuff, and there would be moments where he would be playing and I would think, 'Goddamn, this motherfucker can play.' Like 'Shit, that's Eric Clapton!' At the end of the night, we would do 'Layla,' and that was like 'Jesus Christ, I'm playing "Layla" with Eric Clapton.'

"I remember when I was on the road with David Bowie, and we finished up one night at Madison Square Garden. I got on an overnight flight to Florence, then drove to Perugia, and two nights later I was playing with Gil Evans. That kind of blew my mind -- the range of going in between two very different musical experiences."

Sanborn's frenetic schedule has made him the most visible alto sax player since Charlie Parker.

"I think that's misleading, in that I certainly don't operate on the same level that Charlie Parker did," Sanborn counters. "I got really lucky with getting a lot of exposure. There weren't a lot of people doing what I was doing when I was doing it. Playing with Gil Evans, David Bowie, James Taylor, and high-profile people like that kind of elevated my visibility."

He's right, of course. Though eight of Sanborn's solo works have gone gold, none is immediately recognizable as an indispensable classic like, say, Miles Davis's Birth of the Cool or Coltrane's Giant Steps. His 1979 breakout, Hideaway, contained the hit "The Seduction (Love Theme From American Gigolo)," and Sanborn is nearly apologetic for its inclusion.

"I never play that," he says. "I don't think I've ever played it. Never done it live. It's just -- it's not my favorite tune. I kind of backed into recording that song."

Sanborn's albums are regularly a mix of jazz standards, original compositions, and pop classics. He's covered "Neither One of Us" (made famous by Gladys Knight & the Pips), Leon Russell's "This Masquerade" (a hit for George Benson), "Try a Little Tenderness," and "Spooky." Linda Ronstadt and Cassandra Wilson have contributed to the atypical vocal track, as has Sting, who appeared for a rendition of Bill Withers's "Ain't No Sunshine."

"I really don't think in those categories," he says, "and I think it's unfortunate that anybody does. If other people want to break music down into those categories, let them do it. But to me, it's pointless and kind of limiting."

More disposed to discuss his weaknesses than his strengths as a saxophonist, Sanborn would be hard-pressed to physically locate half the awards he's won. ("I'm not really sure where they are. I moved a few years ago, and I never really found them.") It would be harder still for him to explain his Grammy success.

"It's a total mystery to me," he says. "I don't know what the process is. I don't quite understand it. I don't completely trust it, so it's one of the many things I don't think about.

"My goal is to keep myself interested, to really not ever take stuff for granted. The great thing about music is that you never really master it. You're always looking for new things. And I think, at the risk of sounding too esoteric, I have this sound in my head that I always try to get. Sometimes it's very abstract. Sometimes it's just kind of an ambiance that I want to get across, you know. It's hard to describe. It's like capturing a thought. It always gives you something to work for."