Getcher Cajun on with C.J. Chenier. 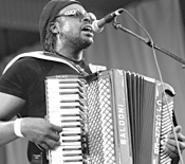 The day C.J. Chenier can't whip his audience into a foot-stompin', hand-jivin' zydeco frenzy is the day he folds up his accordion and heads back home to southeast Texas. At 47, Chenier has spent most of his adult life touring with his Red Hot Louisiana Band and their "happy-feet music." But if they're having an off night, Chenier's the first to feel it. "It's all about dancing, partying, and having a good time," he says. "If it's not, then something's wrong."

Chenier can sense when the rhythm is off, a note isn't in tune, or the stage show isn't as hot as a bowl of New Orleans gumbo. As a teenager living with his mother in Port Arthur, Texas, he played saxophone in neighborhood groups, whose set lists were heavy on James Brown, John Coltrane, and Miles Davis covers.

But across the border in Louisiana, his father Clifton was a zydeco trailblazer, the undisputed king of the French-flavored, swamp-pop beat that came out of the accordion he first learned to play while driving a truck in the '40s. "When he wanted to make blues come out, he made it come out," says Chenier. "When he wanted ballads, he played it soft and sweet. And when he wanted zydeco, he'd yank that out of there too."

A week before his son turned 21, the elder Chenier asked him to join the Red Hots. "I was a little bit reluctant at first, only because I was real young and all the guys in the band were much older than I was," recalls Chenier, who brings his nine-piece band to Akron's Ragin' Cajun Fest on Saturday. "I had never been anywhere, and I didn't know any of them. It was something real different that I was about to get into. It was the best move I ever made, because I think it was his idea all along that I would carry on the music."

Little did he know that he would become the band's torchbearer so soon. In 1987, his 62-year-old dad died of diabetes and kidney failure. Chenier inherited his father's accordion and peppered his traditional zydeco waltzes with contemporary punches of funk, R&B, and blues. Since then, the band has released three CDs, and Chenier's played studio gigs with Paul Simon and the Gin Blossoms.

With his instrument around his neck and his band alongside, Chenier has also become an annual staple at the country's top jazzfests, like Milwaukee's Summerfest, San Diego's Street Scene, and New Orleans' Jazz & Heritage Festival. For a change of pace, Chenier looks ahead to playing Northeast Ohio at least once a year. (Zydeco Fire and Nathan & the Zydeco Cha-Chas will be openers at the Akron show.)

"As I get older, it might be a little harder getting to the job," says Chenier. "But once you get there and everybody's groovin' and having a good time, the energy just comes from somewhere. If it makes you feel happy and makes you want to dance, then that's what it's all about."