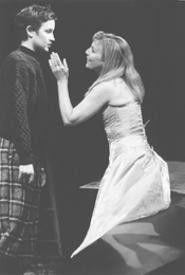 Great Lakes Theater Festival's Twelfth Night totally eschews Kenneth Branagh's Irish roguery and Merchant-Ivory's gleaming Edwardian finery. It commences, instead, in near darkness, on what looks like a theme park dedicated to T.S. Eliot's "The Waste Land." Enter a squad of ghouls waylaid from The Cabinet of Dr. Caligari, holding candles under their bloodless Gothic visages and backing up the Duke as he delivers one of English literature's most beloved openings: "If music be the food of love, play on . . ."

There is a collective gasp in the auditorium. Like cartoon balloons, you can read the audience's trepidation: "Yet another perennial grad student director showing off his dementia . . . If we sneak out at intermission, we can make a late showing of the film festival."

Though this production begins with all the earmarks of a kamikaze dive, it soon reverses course. A 400-year-old antique, often pressed lifeless by academic reverence, is back among the living in a raucous, unpredictable, irrepressible staging.

This transformation occurs with the arrival of Viola, dolled up like a '50s pinup in a Maggie-the-Cat slip. Played by Aria Alpert with the winsome delicacy of a stubborn Bo Peep, Viola finds herself shipwrecked on a seacoast filled with an assortment of half-buried pianos and a ladder made out of driftwood, capped by ever-changing silver moons.

Within minutes, Viola transforms herself into a fetching pageboy in male drag and joins the Illyrian court of Duke Orsino. These courtiers spend their languid days shirtless, in suspenders, lounging in provocative group poses as though waiting for Oscar Wilde to turn up for tea.

A sweet waft of daffy wonder and smoky decadence infiltrates the proceedings. Mark Niebuhr's lovesick, wanly handsome Duke, disheveled in his Hamlet-like inky-black coat, has been worn slender as a reed by his thwarted passion for the disdainful countess next door. He has proclaimed an addiction to excess, as his sex-starved minions sing odes to unfulfilled desire (fashioned out of Shakespearean verse by Adam Wernick for this production). Director Daniel Fish takes the Duke at his word and wraps the evening in a rainbow of glorious excess.

It's a fitting move: Shakespeare reportedly wrote this comedy to top off a royal twelfth night Christmas festival. To match the feast, he made the play itself a roundelay of overindulgence.

Fish has a limitless imagination. Eight out of 10 of his ideas seem wondrous, while the other two interestingly fizzle. He directs with the aplomb of Orson Welles in his WPA days, when he was whipping up a gangster Julius Caesar and a voodoo Macbeth. Like the director of The Magnificent Ambersons, Fish manages to collect revelatory casts and designers (Christine Jones's set and Kaye Voyce's costumes) to boldly improvise and plunder from past treasures. Yet he always uses these jewels to illuminate the text, never to smother it in an arty concept.

He gives us a Countess Olivia, wrapped like a mummy from head to toe in black crêpe, an amorphous black cloud of gloom. While verbally sparring with Viola's disguised manservant, she speaks as if in a narcoleptic trance, delivering her verse with a dolorous melancholy. One would have to look to Ernst Lubitsch's '30s continental comic masterpieces to find such stylish irony.

Kate Skinner is probably a decade past the age for the ideal Olivia, yet somehow this makes her more brittle and effective. In the second act, in a miraculous comic transformation, she changes from eternal mourner to gold-laméd mantrap, flashing sexual voraciousness and a throaty growl.

As her lover, Dallas Roberts's Sebastian, wrapped in a sheet and clutching a post-coital cigarette, is coy and flirtatious, eliciting a Tennessee Williams-flavored eroticism.

From James Whale's fey horror classics, such as The Bride of Frankenstein, comes Phillip Goodwin's Malvolio: a prissy, sex-starved steward, clutching his portfolio, hissing like an angry mongoose at his social inferiors, and throwing kisses at the countess like a smitten weasel. Michael Sanko's Sir Toby Belch, in a patched, threadbare smoking jacket, skillfully plays his drunken debauchery against a Noel Coward aura of ruined nobility. Price Waldman's sad-sack vulnerability makes his suitor, Sir Andrew Aguecheek, funny and pathetic. As the clown Feste, the joyous Michael Rudko brings the play balance, like the Our Town stage manager.

The director pulls off a series of effortless comic crescendos. One, involving an eavesdropping polar bear who camouflages himself as a snowman, is worth the salvation of our theatergoing souls. A gentle snowfall out of Currier and Ives renders chaos into transcendent beauty. This is Shakespeare joyously snatched from academia and given back to the masses.

Keith A. Joseph can be reached at keith.joseph@clevescene.com.