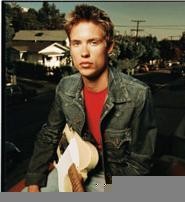 Six years ago, Jonny Lang reached a crossroads in his music and personal life. Too much underage drinking, cigarette-smoking, and drug-using, along with an obsession with witchcraft, threatened to ruin his career and create havoc in his personal life. A revelation gave rise to his current sobriety and new musical identity, and he has found the strength to overcome his personal turmoil through family, Christianity, and God.

Lang, now 25, has completed a turnaround in his personal life. He no longer reads about or practices witchcraft. He doesn't drink, smoke, or do drugs anymore, and he regularly attends church in Los Angeles with his wife, actress Haylie Johnson (Beverly Hills, 90210; Dr. Quinn, Medicine Woman; Caroline in the City).

"I just had a spiritual hunger inside of me," he says. "I knew there was something else. It just wasn't being fulfilled."

The same attitude can be seen in his music. Lang became a household name at age 15 after a major-label bidding war led to a deal with A&M Records. His debut album, Lie to Me, released just a day before his 16th birthday, registered multi-platinum sales and garnered the young blues guitarist a cameo appearance in the film Blues Brothers 2000.

In 1997, Lang met Johnson while touring California. The couple started dating, and Lang became close with his girlfriend's family, who encouraged him to attend church with them. At the time, Lang had no time for proselytizers.

The success of the Fargo, North Dakota native continued with the 1998 release of his second CD, Wander This World. Lang earned a Grammy nomination for the album and spent most of his teenage years on the road with the likes of B.B. King, Buddy Guy, Sting, Aerosmith, and the Rolling Stones. At 17, Lang fell into an adult world of touring, drinking, and drug abuse. He became increasingly fascinated with witchcraft. He smoked two packs of cigarettes a day, became an alcoholic, and used marijuana, Ecstasy, hallucinogens, and other drugs.

"I was at a point where I absolutely loved doing that stuff," Lang says. "It wasn't like I hit this pit and thought, 'Oh, I've got to get off drugs, or I've got to stop drinking.' I loved it. I had no intention of quitting it at all. I had no belief in anything at that time. I kind of hated Christianity. When people tried to get me to go to church, I just wasn't into it at all. I disagreed with everything.

"I told people, 'If Jesus is real, then he's going to have to show up, because I'm not going to just believe in this.' Strangely enough, that's exactly what happened. God revealed himself to me and literally, in a moment, delivered me from every addiction that I had. I had no desire to go back to those things after I had that experience with Jesus."

Lang broke up with Johnson for a time, but returned to visit when her father, Cliff, became ill with cancer and hepatitis C in 2001. One night, he got a call informing him of Cliff's death. Lang and Johnson conversed at length about her father, her relationship with Lang, and his personal life and music career. The couple started dating again and eventually married on June 8, 2001.

"Cliff was a really great guy. He was one of those people who teach you things in life, things that stick with you. He'll be missed for those things. He was mostly an indirect influence. Just seeing how he treated people and seeing how he carried himself and made decisions. He was extremely respectable on all levels. Everyone loved him," Lang says.

In 2003, Lang released his third CD, Long Time Coming. The recording showed the first signs of Lang's move from blues to soulful rock. A year later, the hip-hop world embraced Lang's music too, when Eminem sampled Lang's "Dying to Live" for his production of Tupac and the Notorious B.I.G.'s "Runnin' (Dying to Live)" on the soundtrack of Tupac: Resurrection.

On his new CD, Turn Around, Lang chronicles his new spiritual life. Working with songwriters Drew Ramsey and Shannon Sanders, he has created gospel-inflected R&B and soul in the vein of his heroes.

"I grew up listening to Motown music, and my parents always listened to it," he says. "I've always been a real big fan of soul music. I love Stevie Wonder and Donny Hathaway and gospel music. But I also love James Taylor. He's one of my favorite artists of all time. I'm the kind of person whose style changes as my influences keep changing. I can't help it."

Lang primarily draws from his personal experiences in his new songs. After five recordings (Smokin' was his true debut, a regional hit in 1995 for Kid Jonny Lang & the Big Bang), he still doesn't feel entirely comfortable writing songs alone. He relied heavily on the input of his songwriting collaborators, Ramsey and Sanders, as well as producer Ron Fair, president of A&M/Interscope Records. Listening to his favorite recordings also taught Lang a lot about the craft of songwriting.

"I don't necessarily depend on other people for lyrics. But I have learned a lot from listening to James Taylor and people like Stevie Wonder about how to craft a song," Lang says. "It's one of those things that did not come naturally to me. It's something I'm still learning how to do and trying to get better at. I need someone to collaborate with. I'm not very good on my own at finishing songs."

"I think it's my most personal record," Lang says. "In the past, a lot of the songs were metaphors for something else. These new songs are just more direct. It's me. I didn't pull any punches. I really made a record that sounds like me."