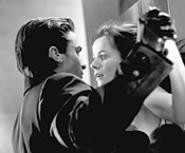 Transcribed verbatim from the DVD commentary track of Star Wars Episode II: Attack of the Clones, here's an informative sci-fi concept from director George Lucas: "As we go through the movie, there's all little funny moments, like Jango bumping his head because in Star Wars one of the Stormtroopers bumps his head as they leave the control room on the Death Star, and I thought, 'Wouldn't it be funny if that's a trait that Jango has is . . . he . . . when he puts his helmet on and everything, he can't really see that well and so he's constantly bumping his head, and that trait gets cloned into all the Stormtroopers, and that's why they keep bumping their heads.'"

Don't get me wrong: I love Star Wars more than most critics, but there comes a point in any branch of science fantasy when you have to punch the dweeboids in the solar plexus and make 'em think a little. On par with this year's satisfactorily diverting Minority Report and Solaris, we're now offered Equilibrium, a similarly adolescent but earnest sci-fi hybrid that's equal parts Star Wars (evil patriarch, stormtroopers, lone hero), The Matrix (same bullet-time stunts, fetishized machine guns, techno-thrash jams, icy badass chic), and most obviously, Fahrenheit 451 (the nearly successful torching of the human spirit).

Honestly, François Truffaut's elegant 451 needs a cinematic update anyway, as only a pitiful percentage of post-post-modern people would give a flip if all the world's books were torched to ashes. To adapt Ray Bradbury's marvelous story nowadays, the fascistic firemen would have to burn DVDs, SUVs, or PS2s, and that's just plain silly. (Imagine hippies wandering around at the denouement, claiming to be the last living receptacles of Resident Evil or a RAV4.)

While it starts off with a laughably heavy-handed tone (writer-director Kurt Wimmer cut his blunt teeth on the 1995 Brian Bosworth vehicle One Tough Bastard), Equilibrium improves as it rolls along -- either that, or fittingly, it wears down the senses until the viewer succumbs. Whatever the case, we are introduced to a now-standardized post-apocalyptic world in which boho artist colonies are systematically destroyed -- along with the boho artists -- by troops of mean guys in black with high-'n'-tight haircuts. You see, these big-city "Clericks" have the nerve to patrol the outer "nethers" and torch the very "Mona Lisa" in their attempt to rid the world of all creativity and feeling. Feeling is bad. Feeling causes war. Thus, feeling is outlawed under penalty of death.

In the midst of this cheery scenario, we meet Clerick John Preston (Christian Bale, amping his innate chill factor). A widower with kids, Preston takes his job of snuffing out all human emotion -- or "sense crime" -- extremely seriously, right down to injecting into his neck his regular doses of Prozium (gee, where'd they get that term?) to flatline his emotions, in keeping with the mandate of the Master Clerick (Angus MacFadyen in an easy role, after playing Robert the Bruce in Braveheart and a wannabe Hitler in Snide and Prejudice). Obviously, as the narrative progresses, Preston is going to change his tune and attempt to save humanity.

The actors playing Equilibrium's supporting characters get to do pretty much what they do best. As Mary, the pretty lady who dares to feel (much as Preston's deceased wife did), Emily Watson gets to have a hissy fit and become a martyr. As rogue Clerick Partridge, Sean "I die horribly in every movie" Bean gets to celebrate the virtues of reading Yeats and then, uh, die horribly. As a plucky resistance fighter, William Fichtner (Armageddon, Go, Drowning Mona) gets to be that guy you recognize but you're not quite sure from where (but he's good). Only charmer Taye Diggs gets to shift gears from his romantic comedy work, playing roughneck Clerick Brandt and struggling to outrun the movie's thesis that black men are untrustworthy.

Filmed in Italy and Germany, where fascism has sucked up life before, Equilibrium pulls a couple of genuine fear-triggers. Unfortunately, from the admittedly slick stunts to the puzzling character motivations (Preston takes his biggest risk to save a dog), it's also hampered by a childishness and is hard to take as seriously as its creators clearly intended. It's in no way as loopy as Star Wars has become, but even Lucas put out the similarly themed and more successful THX-1138 a long time ago. You'd think sci-fi writers would learn from the example, so they could stop bumping their heads.