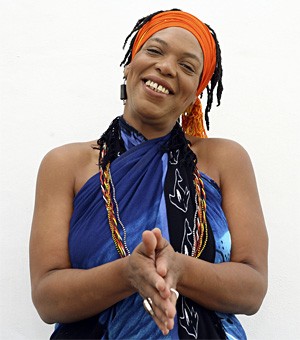 The toilet in Miss Cleo's half-bathroom has been flushing on its own lately. Whenever she walks by the room, she says, it flushes. Consider it an episode of paranormal activity if you wish, but for Miss Cleo, it's nothing out of the ordinary. She says she's been ensconced in the spirit world for as long as she can remember. And as a self-professed voodoo woman, she's proud to have ghosts in her home. "I'm sure people are going to say, 'See, I told you the bitch is crazy!'" she laughs.

Over the past five years, Miss Cleo (born Yourée Dell Harris) has gotten used to ridicule. The former TV psychic has been the butt of a million jokes, stemming from her days as spokesperson for the Psychic Readers Network — where she was known as much for her questionable Jamaican lilt as for the three words she suspects will wind up on her tombstone: "Call me now!"

Talking about her past, you'd expect Miss Cleo to be uncomfortable or defensive. But she comes off as just as interested in discussing her spiritual beliefs as in poking fun at herself. "I love Dave Chappelle's parody," she says. "If you can't have a sense of humor in life, then you're an idiot." She could be angry for having been laughed off TV and indicted by Florida's attorney general for deceptive advertising, billing, and collection practices (she was quietly exonerated of all charges). But instead, she's taken the pain and humiliation of the past half-decade and channeled it into spoken-word material — some of which appears on the recently released CD, Convicted for My Beliefs.

The album's eight tracks find Miss Cleo in a far different mood than you might expect. She's left the tarot cards and psychic-speak behind in favor of straight-to-the-gut protest poetry — as fierce and passionate as anything released by June Jordan or Nikki Giovanni.

At times, the disc lacks polish and literary charm, but Cleo compensates for that with the kind of biting commentary one might expect in a time of war. The subject matter is modern — encompassing the Don Imus scandal and the NYPD shooting of Sean Bell. But the cadences and palpable fearlessness are more reminiscent of the Last Poets than of today's slam-to-entertain, HBO-type poetry. There are no tunes — just 44 minutes of Miss Cleo, a cappella. "Sometimes, music can take away from the lyrics on an album," she says. "People are tapping their feet to the beat and not listening to the message."

After hearing Convicted, you can't help but wonder why more artists and writers aren't out on the front lines like Miss Cleo. "I'm not sure when complacency became the standard, but I will not leave this Earth like that," she says. "I'm tired of being complacent."

In the past, she says, "I spent a lot of time with friends, and we regarded ourselves as activists of old. We would sit and talk and talk about what's wrong with the world. But was anyone doing a damned thing? No, we weren't. We were sitting in the backyard, eating barbecue and drinking Haitian rum. So I decided to do something."

Putting together a spoken-word CD is new territory for Cleo, but she's been writing for decades. She published a book in 2001, Keepin' It Real: A Practical Guide to Spiritual Living. She also penned plays in the mid-'90s. Publishing under the name Ree Perris, she wrote material that addressed racism, misogyny, and issues of particular interest to gays, lesbians, bisexuals, and transgendered people.

Her own lesbianism surfaces on Convicted's "Who I Can Love," where she rails against prejudice. "Homosexuality is something the black community struggles to accept," she says.

Poet, artist, dyke — Miss Cleo wears all these hats. But is she also a psychic? "I am not a psychic," she says. "I am a mambo — a Haitian high priestess. That's what I was trained to do. Being a psychic was not my idea. That was a package that was put together. And it wasn't me."

With that statement, it's as though a collective sigh is exhaled, and the weight comes off Miss Cleo's back. It's the same sense of release listeners might hear between Convicted's lines. It sounds as though Miss Cleo is finally being herself.