Bluster plus mayhem can only mean one thing. 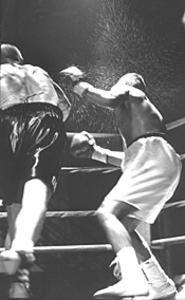 Angel Manfredy's mouth is as assertive as his left jab. What the 29-year-old junior welterweight from Gary, Indiana, lacks in height -- he's 5 foot 6 -- he more than makes up for in bravado. "I'm one to reckon with," brags Manfredy, whose bout with "Raging" Craig Weber of Perrysville will be Friday Night Fights' main event. "I'm not playing no more. I come to destroy and make history. And let Ohio know that."

As if Ohio or any other state in the union needed to be told. For nearly 11 years as a pro, Manfredy has backed up his tough talk by racking up a 43-7-1 record that boasts 32 knockouts, some against such heavy hitters as Arturo Gatti and Jorge Paez. But his personal life has been plagued by out-of-the-ring battles with depression, drugs, alcoholism, and infidelity. "I'm gonna get back what the devil stole from me," says Manfredy. "Vengeance is the Lord's. I've gone through the fire, and whenever you put something through the fire, it comes out pure as gold." He vows to knock out Weber in no more than three rounds. "I'm back, and I'm stronger than ever."

Yeah, yeah, yeah, sighs the soft-spoken Weber. Though two months older than Manfredy, Weber has been boxing professionally for less than half the time. Still, his 19-1-1 record with 10 KOs speaks for itself. "But however well I do will determine how long I stay in this sport," he says. "If I go in and get destroyed, then I'll see what's next for me." Despite his impressive record, Weber hinted that he might quit the sport if he loses this bout; he has three kids to support.

But Joe Delgyd won't hear of it. As Weber's assistant trainer, he doesn't take Manfredy's ego and mouth seriously. "[Weber] does not fear Angel Manfredy," Delgyd says. "[Manfredy's] been hurt. He's been dropped. He's been stopped." And that pep talk gives Weber a confidence boost. "[Manfredy's] been everywhere I want to go," Weber says. "I listen to [his talk] and disregard it. I don't make predictions. I'll try my hardest and give 115 percent."

The undefeated Joe DiSalvo says the same thing. The 32-year-old super middleweight from Cleveland will take on legally deaf Dallas Vargas of Toledo in the co-feature bout to determine Ohio's 175-pound champ. "It's gonna be a heckuva fight, because we're gonna be throwing some punches," DiSalvo pledges. He adds, almost modestly, "I think I'm a little bit tougher."

But no punches will be thrown by undefeated Vonda Ward of Northfield, who was originally scheduled to defend her IBA women's heavyweight title against Canada's Marsha Valley. Ward bowed out of the bout to train for next month's showdown with Ann Wolf in Biloxi, Mississippi. Ward notes that her long-standing invitation to fight Muhammad Ali's daughter Laila still stands. "She keeps running, but I'm gonna keep chasing her," Ward says.

The undercard makes up for the cancellation with a couple of Ohio's most promising up-and-comers, including 130-pounder Chad Wright of Galion and lightweight Shawn Bailey of Cleveland. "I don't know too much about my opponent," says Bailey. "But I'll make it short and sweet."