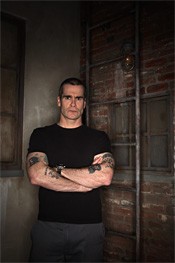 Henry Rollins’ marathon spoken-word sets have become a cornerstone of the multi-hyphened workaholic’s long career. “I go out into the world, reel in a few marlins, and bring them onto the stage,” he says. Over the past quarter-century, he’s navigated waters as a hardcore singer (in Black Flag), TV host (of a self-titled IFC talk show), DJ (at a Los Angeles station), and author (of Fanatic, which collects stories from his radio gig).

Much of Rollins’ comedic and scathing commentary stems from his tours of America’s heartland. Lately, he’s been on a one-man mission to find out just how the U.S. is perceived in foreign spots like Libya, Lebanon, and Iran. And the 46-year-old Rollins -- who spent most of his twenties traveling by van -- still prefers jamming econo, with a bag on his shoulders, boots on the ground, and no entourage. “A lot of interesting things happen in these countries,” he says. “By traveling alone, I’m saying I’m ready to be friends with you. I’m here to say hello to you. Maybe you’ll want to say hello to me.” And they often do. Onstage, Rollins relates an encounter from a recent international jaunt that involved an awkward exchange he had with a displaced Iraqi cab driver in Sweden. “It was just a weird, surreal conversation,” he recalls. “This is why I travel: So I can come back to the stage and say, ‘OK -- here’s what happened the other day in Stockholm.’”
Thu., Oct. 11, 7 p.m., 2007