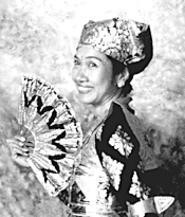 As the education assistant at Oberlin College's Allen Memorial Art Museum, Loren Fawcett took a crash course on everything Ramayana -- the ancient Hindu epic that teenagers in her Puppet Summer program will reenact on Saturday.

The kids spent the past two weeks constructing two- and three-foot-tall Javanese shadow puppets out of durable plastic. They're in "negative form," Fawcett says, because the puppeteers perform the show behind a curtain. "They'll be working behind the screen, so the images will be cast like shadows," she explains. "From the audience's point of view, they'll see silhouettes."

They'll also see the tale of an Indonesian prince and his wife, who are banished to the forest by an evil emperor. Joined by an army of warrior primates, the prince fights back and gains control of the empire. And it won't be any secret who's good and who's evil. "Something that's more garish and bigger and not very slender, with crude features, symbolizes an evil character," Fawcett says. "It's catered to a younger audience, so that everybody will be able to understand the story." Ramayana is performed at noon on Tappan Square (at State Route 58 in downtown Oberlin). Admission is free; call 440-775-8665. -- Cris Glaser

Enemy Mine
First-time novelist taps the past.

In an "eternally present" kind of way, Ingrid Hill can relate to the character in her debut novel Ursula, Under. It's about a two-year-old girl who falls down a mine shaft, while ancestors from centuries past return to comfort her. Before you start thinking of Baby Jessica's plight, consider Hill's past: Her husband walked out in 1987 after fathering 11 of her 12 kids. That's when she buckled down to support her brood by writing prose and short stories -- while earning a Ph.D. in English. "It still doesn't compute that survival could have happened," Hill says. "When I can walk off a cliff and not fall down, miracles can happen." Hill's at Joseph-Beth Booksellers, 24519 Cedar Road in Lyndhurst at 7 p.m. Wednesday. Admission is free; call 216-691-7000. -- Cris Glaser

More than 3,000 rubber ducks floated down the Chagrin River last year at the inaugural Roll'n on the River Rubber Ducky Derby. "We're known for our [live] ducks," says spokeswoman Christina Thome. "The hardware store carries food you can buy to feed them." This year's outing, happening Sunday, pits thousands of patriotically garbed plastic quacks against each other and the river's raging current (winners receive gift certificates from local merchants). "We hold onto the ducks till race day," Thome says, "so that nobody weights them down or puts rotors on them." (Rotors?) Race time is 2 p.m. at Riverside Park in downtown Chagrin Falls. It's free to watch, $5 to buy a duck and participate. Call 440-247-1895 for more info. -- Michael Gallucci

Summerfest 2004 has movie theaters, karaoke, games, fireworks, rides, and five stages filled with music -- including performances by Mushroomhead, Jaded Era (pictured), even the Cleveland Pops Orchestra. "After securing the orchestra, I saw the crazy diversity and [went] all the way with it," says organizer Patrick Malley. It's at the Cuyahoga County Fairgrounds (164 Eastland Road in Berea) from noon to midnight Saturday and Sunday. Admission is $5; visit www.19actionnews.com. -- Melody Caraballo