Put Another Dime in the Jukebox

After 30 years in the biz, Joan Jett still loves rock and roll. 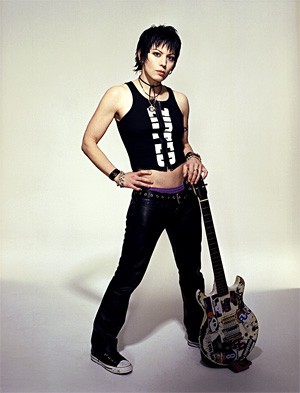 Joan Jett is rockin' and rollin' . . . or at least it appears that way over her crackly cell phone. It sounds like she's rockin' and rollin' all over the back of a car, as she's headed out of Manhattan on a hurried, bumpy ride to the airport. But Jett's pounded a few rocky roads before, all while blazing a relatively straight line.

"I think I've been really consistent and not varied that much, and some criticize me for it," she says. "I like three-chord progressions. To me, it's freedom to follow this path. I like rock and roll — which is different from 'rock' — and I think it implies sexuality. I've always been more on the sexy than cerebral side."

It seems like a fine distinction — thin as an apostrophe — that separates the rock and the roll. But to Jett, it's a crucial one. "Rock and roll" has electric blues, boogie-woogie, and jump bands as its precursors; "rock" of the '60s and (especially) the '70s lost some of that raw R&B momentum as it began trying new tricks in the studio. Jett, for one, has never hesitated to take the music back to its core. Since 1976, she's performed it live and direct for audience after audience.

In the 1970s, Jett played streetwise six-string guitar in Los Angeles' all-female jailbait rockers the Runaways. She gets worked up thinking about the lack of respect the band received back in the day. It's still that way, she says. She believes that the Runaways not only were one of the best bands of their era, but also deserve a permanent spot in the Rock and Roll Hall of Fame. Too sexualized and intimidating for U.S. radio, but huge in Japan, the Runaways recorded one classic, "Cherry Bomb," and produced tons of aural attitude before they broke up at the end of the decade.

The Runaways sparked the strut heard in L.A.'s metal scene, which ran concurrently with punk during the '80s. Jett's post-Runaways sound initially borrowed from glam-rock's stadium-size come-ons, punk's confrontational sneers, and early rock and roll's driving directness. On the 1981 solo albums Bad Reputation and I Love Rock N' Roll, Jett and her longtime backing band the Blackhearts played covers from all these genres.

Their lines of influence ranged from the Isley Brothers' rave-up "Shout" and Tommy James & the Shondells' psychedelic "Crimson and Clover" to Eddie Cochran's balls-out "Summertime Blues" and Gary Glitter's glam-happy "Do You Wanna Touch Me (Oh Yeah)." Even Jett's best-known song, "I Love Rock N' Roll," is a cover (it was originally recorded by some obscure British band called the Arrows).

That fiercely independent voice remains Jett's best rock and roll asset. As soon as she went solo, she was marginalized by record companies. So she began releasing albums on her own Blackheart label. Operating outside of the industry has allowed her to explore the many shades of rock and roll feminism throughout the years — from her 1981 cover of Lesley Gore's "You Don't Own Me" to the tuff-grrrl-and-grit of her latest album, 2006's Sinner.

Yet despite all this talk of rock, there's no questioning pop's place in Jett's music. But her pure riff roots are too firmly ingrained to deny for long. Joan Jett doesn't intrinsically kick ass because she's rock and roll; she kicks ass because she rocks and rolls. "I like rock and roll, because it keeps the message from being diluted," she says. "If there's one thing I've learned [in 30 years], it's that you can't bail. You have to fight for people to get into it."