Queen of the Stoned Age 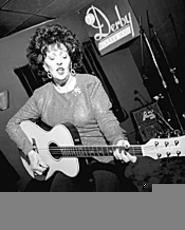 The first time we heard Wanda Jackson's "Let's Have a Party," the frantic 1960 rockabilly record was unlike anything we'd ever experienced. The feral growling emanating from the speakers didn't sound human. The record was dirty, raw . . . and scared the crap out of us. "I'm sorry," laughs Jackson, 67. "My dad always told me to be different."

Jackson -- once called the Female Elvis -- charted several country and pop hits in the '50s through the '70s, including "Right or Wrong" and "In the Middle of a Heartache." She took a 15-year break, returning two years ago with her most accomplished work in decades, Heart Trouble, which includes collaborations with Dave Alvin, Elvis Costello, and the Cramps. "When I saw them, I said, Omigosh!" she says about the microphone-fellating Lux Interior and pals.

Last year, alt-country label Bloodshot released Hard-Headed Woman: A Celebration of Wanda Jackson, a tribute album on which Neko Case, the Bottle Rockets, and others covered some of the Queen of Rockabilly's most popular songs. "The kids did a nice job with the scope of my career," she says. "It's a humbling thing." Jackson is at the Winchester (12112 Madison Avenue in Lakewood) at 8:30 p.m. Wednesday. Tickets are $18; call 440-333-9799. -- Michael Gallucci

Ever since a friend asked Mike Hovancsek to write a story about a woman who'd been raped, he's discovered that victims find strength in The Healing Circle. The show is a "moving piece of art" composed of video collages, diary readings, and dance segments set to world music. "This isn't something that's isolated," says Hovancsek. "I didn't want to take one person's story and hijack it. I wrote a play that was a composite of many true stories." Between dance and spoken-word vignettes, a narrator throws out stats (e.g., most rapes are committed by friends and family members). "We'll dispel myths that all rapes are done by perfect strangers jumping out of bushes," says Hovancsek. "And that it happens only to pretty young women." Show time is 8 p.m. Saturday at Kent State University's Kiva Auditorium (in the Student Center on Summit Street in Kent). Tickets are $10; call 330-673-4970. -- Cris Glaser

Barium would still be a distant memory if guitarist Josh Miktarian hadn't bumped into drummer Dan Boland at a pre-Ozzfest party in 2001. "After a long day of extreme intoxication, which included a friend running nude outside and me getting beat up by security for moshing in a mosh pit, we discounted [our conversation] as baseless, drunk babble," recalls Miktarian. Good thing they reconsidered. Holed up in an Akron studio for seven months, the guys came out of isolation last year with the prog-rockin' Periodicals, which includes a pleasant little original called "Fuck Face." Barium performs at 10 p.m. Friday at Tha Bing, 1955 Triplett Boulevard in Akron. Admission is free; call 330-798-0544. -- Cris Glaser

In Cabaret Sampler, Tina Stump (pictured) warbles songs by ingenue characters she could never play -- like the lily-white "Big, Blonde & Beautiful" from Hairspray. Also featured in the show of Broadway and movie standards are Paul Hoffman's take on Kander & Ebb classics and Lynnette Guttmann's interpretation of the Theme From the Valley of the Dolls. Show time is 8:30 p.m. Friday and Saturday through April 23 at Kennedy's Cabaret, 1501 Euclid Avenue. Tickets are $15; call 216-241-6000. -- Cris Glaser