The prize is $2 million, but the reward isn't worth the effort. 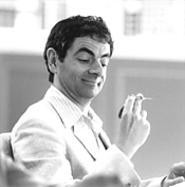 There is one joke in Rat Race, a.k.a. Cannonball Run IV, so stunning -- because it's the one joke in the film that actually works -- that it bears repeating here, if only to spare you the misery of actually witnessing this crime against humanity. Jon Lovitz, playing a character who might as well be named Jon Lovitz, is speeding through the desert with his wife (Kathy Najimy) and two children. Lovitz's daughter, played by a young actress whose name and face and voice and everything else have slipped my mind, spies a sign along the road to nowhere advertising, in pink curlicues, a Barbie museum, which fills her with delight. Najimy forces Lovitz to make the pit stop, much to his chagrin -- he's currently involved, along with the rest of the Hollywood squares, in a race to New Mexico, where $2 million awaits the victor in a train-station locker. Did I mention that Lovitz made his daughter crap out of the window earlier, while the car was moving? No? Not important.

Alas, he pulls over . . . only to find himself at the Klaus Barbie Museum, where sieg-heiling skinheads tend to the legacy of the Butcher of Lyons. "This museum is dedicated to debunking the myths of revisionist Jews," says one would-be Nazi to the very Semitic Lovitz, who gathers his family and excuses himself by insisting he's late to a "Christening . . . or something very non-Jewish." A few moments later, Najimy and the kids are riding shotgun in Hitler's limousine, dolling themselves up in, among other things, Eva Braun's very dark lipstick. "What goes around, comes around," Lovitz says, his voice full of bitterness and pride.

As a movie, Rat Race is one hell of a three-minute sketch, the best thing Lovitz never did on Saturday Night Live. The rest of it is a horrific mess that looks like something made years ago that sat on the shelf way past its expiration date. (Which may be the case: The film's being released by Paramount, but Fox logos receive prominent placement in several scenes, and its prodigious use of Smash Mouth's tiresome "All Star" suggests outright obsolescence). It renders tragic men once known as great comic actors -- John Cleese, Blackadder's Rowan Atkinson, SCTV's Dave Thomas -- and has the dubious honor of making willing fools of Academy Award winners: Kathy Bates, Whoopi Goldberg, and Cuba Gooding Jr., all of whom will one day claim occupancy of the center square. The whole film seems to be made of deleted scenes you might find on a DVD: Bates trying to sell Goldberg a squirrel, Gooding piloting a bus full of Lucille Ball imitators, Wayne Knight (Seinfeld's Newman) clutching a beating human heart. All elicit only laughs of embarrassment for actors who should have known better doing their worst.

Very clearly, director Jerry Zucker (who hasn't made a funny movie since Ghost) and ex-SNL writer Andy Breckman imagine theirs is a wry, sarcastic updating of Stanley Kramer's It's a Mad Mad Mad Mad World, in which Sid Caesar and Milton Berle led a cast of greedy thousands to a stash of cash beneath a giant "W." What Breckman and Zucker have given us instead is a bad bad bad bad movie. In Rat Race, the money ought to be kept under a colossal "FU."

Perhaps there's just little point to a film about a race for two million bucks, when ours has become nothing but a culture of desperates willing to debase themselves and degrade others in the never-ending hunt for spare change. Why pay to see this addled fabrication when you can turn on USA Network and see it for free on Cannonball Run 2001, a gumball rally with a Survivor twist and Jackass high jinks? Reality television, for better or worse, has rendered a film like this completely moot (well, so have the direction and script and actors, including Seth Green and the Road Trip tandem of Breckin Meyer and Amy Smart). Why watch Whoopi whooshing across the desert in a rocket car (Christ, did this even read funny, or was the script printed on thousand-dollar bills?) when you can turn on Fear Factor and watch some everyday schmuck get his skin flayed off for a bag of pennies? Life's too short. Well, for some -- say, anyone who appears on a Fox reality TV show -- not short enough.

Or maybe Rat Race is intended as a satire of such shenanigans, though if one must add the "maybe," it's doubtful. (The film's too directionless to have purpose.) Las Vegas casino owner Donald Sinclair (Cleese), who arranges the all-star pursuit from Nevada to New Mexico, has done so for the secret enjoyment of wealthy gamblers for whom card-playing has lost its thrill. "It's a horse race with humans," he promises through enormous fake teeth that look like white kitchen tile, "the gambling experience of a lifetime." Sinclair and his international hooligans will literally bet on anything: how long chambermaids can hang from curtain rods, or whether a hooker will party in a Jacuzzi of Pepto-Bismol while shaving Dave Thomas's ass. During those surreal throwaway bits, the movie feels like something imagined by Terry Southern on a highball high -- the Magic Christian starring Monty Python's smoothest operator.

But there's nothing more enervating than a stupid film with only random and perhaps accidental flashes of smarts; the rare prescient moments serve only to highlight how banal and vacant the rest of the movie is, especially when it stoops to conquer the gross-out market bled dry by the Farrelly brothers and their myriad acolytes. The trailers for Rat Race, which run during every Cannonball Run 2001 commercial break, give away the most obnoxious prank the film can muster: Seth Green and a cow hanging from a hot-air balloon. The gag lasts so long, it becomes a plot point; Breckman and Zucker milk every drop out of it, quite literally, until dazed chuckles become weary groans. It's, God help us all, an udder disaster.