Two short plays at Karamu House lay things out in black and white. 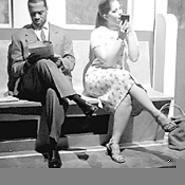 In a city as neatly and profoundly segregated as Cleveland, where African American families residing in western suburbs must often deal with hostility (unless the man's name is emblazoned on the jersey of a local pro team), there is a need to continually probe the dynamics of race relations. Two short plays in production through February 23 at Karamu House -- Dutchman, a 1964 work by LeRoi Jones, and Cornell Calhoun III's The Grand Prix, which is enjoying its world premiere -- do precisely that. Though their perspectives are separated by decades, the two works exhibit a shared sensibility.

In Dutchman, Jones (who subsequently changed his name to Amiri Baraka) depicts a provocative confrontation between a black man and a white woman on a New York subway. When it opened, the short play stunned the theater world with its in-your-face language and interracial sexual tension. Although the passing years have diminished the shock value, the play's evocation of rage and disillusionment remains very current.

While minding his own business on a subway, Clay, a three-piece-suited African American, finds himself being hit on by Lula, a sexy white woman. There ensues a teasing, sensuous, and tormenting conversation, with Lula aggressively stroking Clay in more ways than one. In time, though, her cooing endearments segue into cutting racial insults, until Clay finally erupts in a furious verbal counterattack.

Is the woman real, or simply the self-loathing part of Clay's mind that wants to be white and middle class? Writing in a revolutionary poetic style, Baraka attempts to rip truths -- whole and pulsating -- from the American body politic. "If Bessie Smith could have killed 10 white people, she wouldn't have needed all those songs," Clay says at one point. Coming from a playwright who evolved from beat poet to black nationalist to Third World Marxist, such sentiments seem a bit like historical artifacts, now that discussions about racial equality have become more subtle. (Subtle, but not necessarily less racist.)

As Clay, John "Jamir" Howerton is smoothly urbane as he tries to comprehend what Lula is all about. And when he finally goes off, his lacerating diatribe is as searing as it is beautifully controlled. Andrea Raab is a sultry Lula, but her languorous tempo feels more technically imposed than character driven.

In The Grand Prix, Cleveland playwright Calhoun addresses a very real situation: the takeover of neighborhood property by corporate interests (in this case, a giant medical complex). As in Dutchman, there's plenty of disillusionment here, but the argument never becomes fully engaged.

The play begins with a wonderfully spontaneous scene as some old friends bat around their memories, dreams, and fears in a garage that serves as a de facto community center. They're killing time, waiting for a friend who has gone to City Hall, perhaps armed with a gun, to confront municipal bureaucrats who are trying to buy his property for less than it is worth.

Paul Hairston is a standout as Blue Hill, the loquacious jokester who likes his peas fried and his women bowlegged. Leonard Goff brings a tender vulnerability to wannabe racecar driver Detroit, and Denise Richmond-Kelley sparkles as gal pal Cynthia. But having established a handful of interesting characters and a potentially compelling plot line, Calhoun allows the hot air to escape from the balloon in a tiresome, exposition-filled scene. There's so much unrealized promise here that one is moved to ask the playwright to sit back down and finish the work in the style in which it began -- with real characters interacting with humor and honesty.

In spite of the flaws, Hassan Rogers directs both plays with a sure hand, helping bring out the humanity of people who, for one reason or another, feel trapped in their own society. As Cynthia says at one point in The Grand Prix: "Living on East 43rd Street is like being the only one in a race that you can't possibly win." When it comes to our city's fitful progress in race relations, that's how it feels to many of us.