Racial stereotypes are roasted in Karamu’s The Blacks: A Clown Show 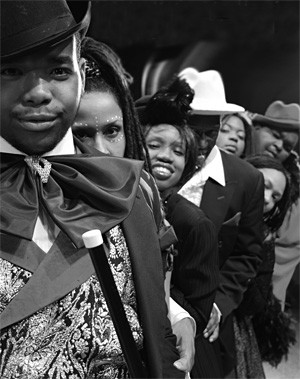 For anyone either amused or disgusted by the widespread negative response to Reverend Jeremiah Wright's sermons, there's a play you must see: Jean Genet's The Blacks: A Clown Show, now at Karamu, is an aggressive and brutally confrontational tone poem dealing with racial issues — one that will leave an imprint on your mind.

Genet — the white French playwright who spent a good chunk of his youth as a thief and male prostitute — was a master at creating theatrical ceremony and ritual. And in director Terrence Spivey's perhaps finest work to date, Genet's lyrically cruel and teasingly absurd script is brought vibrantly to life.

The setup is simple yet loaded with meaning: A troupe of black performers is called before a tribunal of five, who are played by black actors wearing white masks. The players, embodying various black stereotypes, then act out the murder of a white woman, which they have been accused of committing, to the titillation and astonishment of the white power elite.

There are few conventional narrative progressions in this engrossing piece. In its place, Genet has constructed a symphony of voices from black culture, voices that attack white preconceptions and comfortable assumptions. Although white, Genet always felt like an outsider, and the rage he expresses in this play on behalf of blacks feels fully genuine.

Although the subject matter is heavy, the Karamu production is thoroughly entertaining and often dazzling. Archibald, the leader of the acting troupe, is given a galvanizing portrayal by Jason Dixon. Taking the character profile of the emcee in Cabaret several steps further, Dixon prowls the stage like a decadent cougar, ready to pounce on other performers and even an audience member or two. He is supported in grand fashion by glowering Joseph Primes as Deodatus Village, the supposed murderer, Erin Neal's attitude-heavy Augustus Snow, and Saidah Mitchell as the tribally bedecked Felicity Trollop Pardon.

As good as some individual performances are, the real triumph is the ensemble work, tied together by Spivey's energetic movement and hip-hop-tinged choreography. All 13 actors are onstage most of the time, but it never seems like anyone is loitering. And their concentration is admirable; on opening night, a man in the audience appeared to faint, and the players, led by Dixon, helped the gentleman out and then continued the play seamlessly.

Felicity forecasts, "Everything is changing. Whatever is gentle and kind will be black: Milk will be black, sugar, rice, doves, hope." The collision of those dreams with harsh reality unleashes the power of this theatrical tour de force.