St. Nick slaps on skis and hits the water. 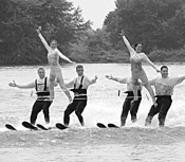 Christmas comes every Wednesday night this summer for the Chippewa Lake Water Ski Show Team. During its weekly theme show, Searching for S.C. , a water-skiing Santa Claus and 35 elves go on vacation to Florida. Fourteen different stunts are performed in the show -- from a four-tiered human pyramid to an "adagio," in which a female gymnast performs handstands in the palm of a male skier's hand.

Once the season ends in early September, the team will start work on a new show for next summer. "Even in January, we organize the boats' driving patterns," says troupe member Debbie Bican. "We make all our own costumes, we have to write scripts, pick out music, put the music to CDs, and practice on land during the winter."

The year-round work paid off last year, when the eight-year-old group snagged first place in a national water-ski competition in Iowa against a dozen other squads. "Most of these teams have been around 25, 30 years," says Bican. "And even though we are a young team, we knew we could do it. We've been called the Little Ski Team That Could." Watch the little team take on Santa from 7 to 8:30 p.m. at Emerald Lake on Clark Mill Road in Norton. Admission is free. Bring a lawn chair. Call 330-769-2515 for more info. -- Cris Glaser

Fly by Night
Metroparks host an evening of bats, man.

At sunset, it's breakfast time at Bat Gala for the 80 brown bats that call South Chagrin Reservation home -- the bat colony puts on an aerial show as it searches for beetles, moths, and mosquitoes. Once the winged mammals have loaded up on their first meal of the day, they'll fly back to their roosts while spectators parade around in bat costumes, catch stuffed insects lined with Velcro, and play trivia games about the flying critters. The bash winds down with a screening of The Devil Bat, a 1940 B-movie starring Bela Lugosi as a mad scientist who breeds bloodsucking bats. It all happens from 6 to 11 p.m. Saturday at South Chagrin Reservation's Shelterhouse Picnic Area (off Hawthorn Parkway in Bentleyville). Admission is free; call 440-247-7075. -- Cris Glaser