XM Satellite Radio hopes to take over the airwaves. It's bad. It's nationwide. 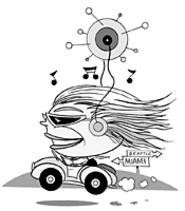 In the future, radio won't be beamed from rusty old antennae. That's so analog, so last-century. The future, as we all know (so shut up already), is digital, and more and more of it is being beamed down from space via the satellites floating above us, dangling from invisible threads, watching us.

And they're not just monitoring. They traffic in images, providing everything from The Hot & Nasty 24-Hour Luv Fest to The Rock's Pump-You-Up Party Workout to Cooking Meat With Martha. Trillions of bits of data are raining down as you walk your poodle in the park. They're dropping onto your supple skin while you're relaxing in the bubble bath. They're coating your hair with fine digital dust.

And now radio's getting into the game.

Specifically, XM Satellite Radio. It's dumping a load of bits onto America in 2002: Data's floating through the cumulonimbuses and making a beeline for your eardrums. With the right decoding device ($300 for a satellite radio receiver, plus $9.95 per month), you can listen to the reconstructed sound of these bits: music galore. Information. News. Sports. Comedy. About 100 channels of it.

The new radio, a CD-quality version based on the model of cable TV, has arrived, and XM is hoping you're gonna want to listen to it in your automobile as you're stuck in traffic. It's nationwide. You could, if so inclined, drive from Miami to Seattle, listening to XM's "Music Lab" (channel 51, "progressive fusion," where Genesis and King Crimson rule) the entire 3,400 miles. Truckers, they love the XM. No more fuzziness. No more static. No more knob twiddling.

If you're alive and have working ears, XM Satellite Radio thinks it has a station for you, and it has bet over a billion dollars that it's right. You're somewhere within the specific confines of one of the 100-odd demographic groups: You've either grown up in the '40s, '50s, '60s, '70s, '80s, or '90s (what about the septuagenarians among us? Huh?), so, if nothing else, they've got the nostalgia root tapped: You can hear all of the oldies, a station devoted to each of the aforementioned decades, all the time on XM.

Aside from nostalgia, though, XM knows that you're special, and it wants you to believe that it'll play your music. That your music will be broadcast for you all the time.

You like blues, yes? No?! Then surely you must like country. No? Not even alternative country? Classic country? Progressive country? You like gospel? Rap? Hip-hop? Classic rap? New age? House and trance? How's about some reggae (on "The Joint," ha ha)? Extreme rock. Indie rock. Jazz, both the sorry lite variety and the classic bebop variety. Afropop. Hindipop. They've got it all on XM.

"We've basically created a new generation of radio," boasts Chance Patterson, vice president of corporate affairs/mouthpiece for XM. "This is a medium that's unique in that it's been around -- at least FM has -- for more than 40 years, and it's the most deeply penetrated medium of all -- more so than telephones, television, you name it. But it hasn't really moved ahead from a creative standpoint, and certainly from a technological standpoint, in decades. We're changing that."

The question: Does a buttload of bandwidth and 100-plus stations automatically equal "creativity"? Is cable TV inherently more creative than network TV?

An immersion in XM reveals that, yes, there is more creativity at work on XM than on FM, but that's relative. Commercial radio is a sad, pathetic beast devoid of creative inspiration, so even a modicum of adventure -- which is what XM offers -- is a welcome relief.

Says Patterson: "We figure, if we sound the same as what you already have, you're not going to be interested. We have to challenge ourselves, we have to challenge our listeners, we have to be insightful, engaging. There are people from all different walks of life who are not being served by the radio. You can hardly hear Sinatra in New York; you can't hear B.B. King in Memphis; Bob Marley is basically invisible on radio. All these major artists can't get arrested on the radio these days."

He's got a point, and for the music nut, XM plays a lot of good stuff. In the first hour of scanning and jumping and waiting for a surprise, music jumped out by EPMD, Solex, Spiritualized, New Order, MC Lyte, 2 Pac, and some of the craziest Mandarin/Chinese pop artists you'll ever hear. It was a joy to jump to "The Rhyme" (channel 65, "classic hip-hop") and catch a dose of the Jungle Brothers' "Jimbrowski." The song was never a huge hit, has no place on commercial hip-hop stations, and can't buy a spot on an oldies station. But there it is, coming out of the car stereo, on the radio. XM is quenching, like drinking a huge glass of ice water after being lost in the desert that is commercial radio.

But, like cable, there's a lot of crap within. XM accepts cultural/historical assumptions, relies on singles rather than album tracks, and neglects much of the passion. You'll hear "Born to Run" on a few different stations, but there's no way in hell you'll hear "Darkness on the Edge of Town." You'll hear a Donald Glaude mix on "The Move" (channel 80, "Modern Electronic Dance"), but you're not going to hear Matthew Herbert's "Let's All Make Mistakes"; the dance stations (four channels, "Modern Electronic Dance," "Club Hits," "Urban Mixes," and "Disco") are sick with flavor-of-the-week syndrome, as are many of the "alternative" stations.

Many of XM's stations seem designed to fulfill one of the (sad) aspects of many people's desires: music as a memory serum, music used to take listeners back to another moment in their lives, to relive the fantasy, to fire the good-old-days neurons.

But, with a billion bucks invested in this new musical-delivery system, of course (and alas) they can't hit us with 24-hour Tuvan throatsinging or a commercial-free minimal tech-house station. They've got to recoup, and you can't recoup by jamming Throbbing Gristle all the time. Even with XM, then, commerce is still king when it comes to radio. But at least now it has a proper crown.