Traditional stations face a bevy of upstarts. Where will listeners tune in? 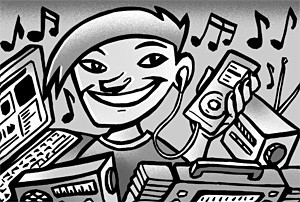 Many folks have about as much use for the radio these days as they do for old VHS tapes. There's competition from all sides of the digital spectrum — from podcasts to net radio. Compared to its online and digital brethren, traditional radio is slow, stodgy, and hopelessly outdated. But more than 230 million people still get their weekly sports, news, and music fix from the old-school dial.

This isn't to suggest that the industry is thriving. A dozen years ago, ownership caps were lifted, and media giants gobbled up as many stations as they could. Wall Street jumped into bed with a select few owners, handing over the cash they needed to acquire these increasingly valuable properties. But when the dot-com bubble busted and ad revenues fell, Wall Street turned into a cruel pimp. With revenues unable to meet the moneymen's demands for growth, cost-cutting was the only way to keep stock prices up. Yet it came with a side effect: crappier product and more commercials.

But let's not get bogged down in history. While radio's audience is shrinking on par with network television's, it's still the biggest game in town. It even seems to have gotten over the denial stage and recently began addressing age-old problems. In 2007, the industry unveiled the Portable People Meter, which measures listeners' preferences more accurately than the old-fashioned diary that was counted on for years. Corporate behemoth Clear Channel shed a substantial number of its stations in an attempt to go "private." And digital radio made a few more dents in the marketplace.

"Everybody is definitely trying to move forward," says Sean Ross, radio analyst for Edison Media Research. "What we're heading for, in a couple years, is the wireless broadband car radio, [where] you can hear radio stations streamed in your car."

At that point, anyone with a computer, basic software, and some downloaded tunes can take on K-Rock. In essence, traditional radio stations will be competing with online streams that are customized to listeners' tastes. So there'll be no more sitting through that Seether song in hopes that the White Stripes are up next. But media analyst Gerd Leonhard doesn't hear a death knell. "[Stations] stand for a certain style, genre, or whatever," he says. "That's the value of radio. It's like television: Why would I watch American Idol, if I wasn't thinking I'm going to see something of relevance?"

"There's plenty of regional opportunities for radio stations to talk about news and events on a local level," adds Berklee College of Music VP Dave Kusek, who collaborated with Leonhard on the book The Future of Music. "That has nothing to do with music. I think terrestrial, location-based radio is still going to be a good business for a long time. Whether it's breaking bands, I don't know. Radio doesn't have as much of an influence as it used to. But it certainly has some."

Maintaining a shred of credibility with its audience is one thing, but radio also needs to sustain a relationship with advertisers. In October, a Cox Radio exec complained about radio's ratings in Philadelphia and Houston — the first cities to implement Portable People Meters. The beeper-size device literally "hears" whatever the person wearing it is listening to and tracks the results.

But they're not without their detractors. When the initial batch of ratings came out last year, several stations took severe hits — including the urban ones in Philadelphia. That drew criticism from lots of industry types, who argued that the relatively small percentage of listeners sampled, as well as the low number of minorities reflected, was unfair. And while early returns suggest that more people are listening to the radio than suspected, their average listening time has decreased. And that's what has industry insiders concerned.

PPMs promise to revolutionize radio in other ways too, says Ken Tucker, an editor at the trade magazine Radio & Records. For one thing, stats will be available overnight and with unprecedented detail. "[Record companies] are worried that it will come down to [radio programmers] using the meters to decide what songs they play," he says. "You'll be able to see, when you play a [certain] song, if people tune out." And that means less diversity, more Daughtry.

Meanwhile, digital radio is slowly gaining momentum, with some of the new cars that are rolling off the lines offering it as an option. That's exactly how satellite radio got started. But very few listeners have the high-end receivers necessary to pick up digital broadcasts on the road or at home. So programmers haven't put much time or effort into these stations — most of which amount right now to little more than genre-specific jukeboxes without advertising.

Yet radio continues to surprise even the most cynical of insiders. "There's still money to be made," says Jeffrey Yorke, business editor at Radio & Records. "There is no other business I know of where you can make that kind of return. It's a phenomenal return, if you know what you're doing." In other words, radio's biggest supporters just need to listen to the music.