Hail to the Thief (Capitol) 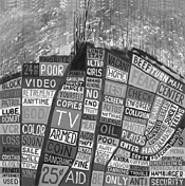 The first sound audible on Radiohead's sixth LP is the crackle of guitarist Jonny Greenwood plugging in his instrument. A welcome hum ensues -- one that was largely absent from the band's last two albums, which formed a beautiful but amorphous pastiche of malformed beats and sputtering gadgetry. Hail to the Thief is similarly infatuated with machine music and will still appeal to aesthetes: One of the album's best cuts, "Myxomatosis," is an ominous rave-up of rubbery, propulsive synth, riding atop beats that sound like firing pistons.

But midway through the tribal thumper "Here Here," Greenwood lets loose with a squall of hot-blooded guitar not heard from this bunch since OK Computer. Greenwood's impassioned playing sets the tone for Thief, where Radiohead grounds its customary electronic envelope-pushing in more discernible, straight-up rock songs (such as the dirty funk workout "Go to Sleep"). Even the ballads work themselves into a frenzy here. Opener "2 + 2 = 5" is transformed from a quiet condemnation of overbearing authority figures into a melee of bloodcurdling wails and cacophonous guitar; "Sit Down, Stand Up" morphs from tender torch song with tinkling chimes into a frantic blitz of bustling circuitry. It's all progressive and palatable, making Thief an album even an Amnesiac couldn't forget.