A toast to two wine bars of recent vintage. 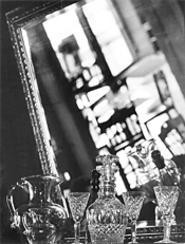 Oh, Cleveland! Uncle Stosh would hardly know you. Here, in what was once the land of perch, pierogi, and POC, a quiet revolution has taken place. No longer do underground sophisticates smuggle their Lambrusco past suspicious relatives. No longer is wine enjoyment the sole province of the snooty elite. Nowadays, practically everyone seems to be into the stuff, and if the region's recent wine-bar boomlet is any indication, they're heading to cozy neighborhood haunts to enjoy it. So far, Cleveland hasn't produced an exact replica of Chicago's famed Bin 36, with its vast cellar, gourmet menu, and zinc-topped oval bar inside a 35-foot atrium. But that day may still come. Meantime, here's a toast to two of the area's newest wine bars.

Someone should have thought of this years ago: blending a wine bar and a coffeehouse into one trendy little pour. As it happens, though, the props go to Mark and Maureen Reich, a couple of creative minds who opened Varietals in Cleveland Heights last July. The Reichs were thinking way outside the box when they hit upon the idea of combining an Arabica and a wine bar, but it makes eminent sense -- especially for those who often find themselves in the company of teetotalers or young people. Here, everyone can suit himself -- the grapey gurus on a cushy couch near the white tile fireplace, sipping on Merryvale or Mondavi (or Glenlivet Scotch, Ferrante Ice Wine, or Bonnie Doon Framboise, for that matter); the non-wine-inclined indulging in cappuccino, hot cocoa, or even beer, in a totally nonsmoking environment.

Like most wine lovers, Maureen Reich says she abhors wine snobbery or pretension, and her logical, informative, and highly readable wine list backs her up. Besides the basic info -- grape variety, winery, region, and (at least for the pricier offerings) vintage -- the list includes chatty facts and whimsical descriptions that make it easy to find an old favorite or take the plunge into new waters. (How can you resist a Viognier, after all, that's been dubbed "the Audrey Hepburn of white wines"?)

The menu begins with an entire page devoted to wine flights -- 22 of them, to be exact, priced at $8.75 to $16.50. Each flight consists of four 2-ounce pours, grouped by varietal, region, or style; wine geeks and novices alike can have fun comparing and contrasting the members of each flight. And like all of Varietals' wines, the selections are poured into delicate Riedel stemware (insert applause here), which most aficionados believe enhances the appreciation of both bouquet and taste.

Beyond the flights, there are 95 wines available by the glass (most in the $6 to $8 range) and about 215 reasonably priced wines available by the bottle. (While a 100-percent boost over retail prices is common in restaurants, Reich says her average markup is only around 25 percent -- more on less expensive bottles, less on the pricier ones.) Because serious wine drinkers often avoid by-the-glass pours out of concern for freshness, Reich says she tries to ensure single-pour quality by replacing damaging oxygen with a nightly spritz of inert nitrogen; also, she says, she disposes of opened bottles after a maximum of five days. (While there's plenty of debate among connoisseurs on this topic, certain purists will insist that even five days is far too long for the contents of an opened bottle to survive.)

Crostini, topped with either olive tapenade, bruschetta, or a blend of Danish blue cheese, honey, and pecans (the sweet-savory Sweet Georgia Browns), tasted lushly piquant, as did the smoked Norwegian salmon, served over miniature potato pancakes and sided with caviar, onions, and chopped egg. The only disappointment was a chicken-grape-and-almond-salad sandwich on thick slices of raisin-walnut bread: too much dry bread and too little filling paved a road to Dullsville.

For dessert, don't miss the chocolate fondue, served with fresh fruit, marshmallows, and cubes of chocolate cake, just right for swirling through the bath of creamy, semisweet chocolate. The chocolate was so rich and mellow, in fact, that the addict in our group eventually removed the fondue pot from the flame and proceeded to swipe out the final remaining driblets with her fingers.

Next time, she's drinking the coffee.

Like many of its peers, Royal Vine does permit smoking -- which can be a turnoff for those who take their wine enjoyment seriously. Another bummer: Management is a trifle stingy about doling out the Riedel, reserving it for guests who order bottles of Cabernet or the pricier single pours (insert tut-tutting here). But those rough edges detract only slightly from the overall experience, and with its 400-bottle wine list, good-tasting tapas, and expert staffers, the year-old Vine's still fine in our book.

The well-organized international wine menu, in particular, is a corker, with selections that range from old favorites to delicious new discoveries like Gruet Brut, a sparkling white from Albuquerque. In assembling his cellar, Soussou has generally avoided everyday grocery-store wines, focusing instead on handcrafted products from smaller boutique wineries; even sweeter, all prices are set at a modest $10 over retail. Besides the bottles, there are four wine flights (priced at $8.50 to $13), including one that features three different styles of seldom-seen Cabernet Franc; and 24 by-the-glass pours ($5 to $13.50), with opened bottles preserved through a temperature-controlled tapping system that immediately replaces oxygen with nitrogen. A short collection of high-end bottled beers provides alternatives for vinophobes.

The freshly prepared tapas include cool, lemony poached shrimp, served with a mild housemade cocktail sauce; zesty sun-dried tomato tapenade, sided with crisp crostini; and the usual cheese-fruit-and-nut platter, available with an optional assortment of very good sausages. A "terrine" of Maytag blue cheese and walnuts was too nutty and not cheesy enough for our tastes, although the sliced pears that accompanied it were ripe and juicy. And Chocolate Madness mousse cake, with a glass of sweet Moscato, elicited satisfied murmurs.

Afterward, cruise over to Royal Park Fine Wine, Soussou's next-door wine shop, for a look around. Totally unstuffy and completely cheerful, the store is stocked with a fine selection of West Coast vintages, as well as some unusual -- and expensive -- cult wines, such as a collection of $100-plus Silver Oak Napa Valley Cabernets, which Soussou keeps under lock and key. Just beware the diabolical power of the grape to lower inhibitions, enhance enthusiasms, and loosen one's grip on the wallet. Otherwise, you may end up as we did, toting home an entire case of brand-new favorites.