Perplexing topics abound in Beck Center's Raisin in the Sun. 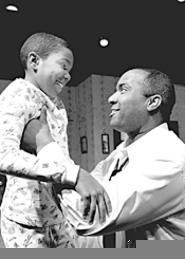 Since we're on the cusp of another Oscar-night blowout, larded with sweaty desperation and tearful self-congratulation, it's worth noting that awards for creative achievements are, at best, an iffy proposition. Who's to say that Hilary Swank's performance is better than Annette Bening's, when there are no objective criteria? And even though this page offers its annual "Best of . . ." designations in local theater, we at least see the process for what it is: mightily flawed and often simply dead wrong.

One of the myriad examples of awards gone bad is the fact that the astoundingly perceptive 1950s drama A Raisin in the Sun by Lorraine Hansberry never won a Tony or a Pulitzer, while over the years other less skillfully conceived works (i.e., August Wilson's bloated and often silly The Piano Lesson, now at the Play House) have been handed plenty of statuary. Now being given a compassionate revival at Beck Center, Raisin is a classic kitchen-sink drama that demands to be taken seriously half a century later. It manages to touch on a volley of hot cultural issues, some of which only surfaced in the public (make that Caucasian) consciousness after the original Broadway production in 1959. These topics include African American pride and ambitions for financial success, and the female fight for power in a society both racist and sexist.

Although the issues are complex, the beauty of Hansberry's script is in its utter simplicity. The Younger family is living in a rundown flat in southside Chicago, trying to cobble together a life and a future against daunting financial odds. The matriarch, Mama Younger, is open-hearted with her family when she's not cleaning houses, but she's tough as a 50-cent T-bone when it comes to respecting her Christian beliefs and the honor of her deceased husband. Her son Walter Lee, a chauffeur for a rich white man, has scads more dreams than he has practical plans, imagining himself an executive instead of opening doors for his cosseted passengers. His wife Ruth also works as a maid while raising 12-year-old Travis (Anthony Nickerson). The fifth occupant of this apartment is Beneatha, Walter Lee's sassy sister, who's attending college with the goal of becoming a doctor.

The event focusing all their attention is the imminent arrival of a $10,000 check from papa Younger's life insurance policy. Naturally, Walter Lee wants to use the cash as seed money for a new career, but his aspirations are shrugged off by pregnant Ruth, who's heard it all before. Walter Lee is tormented by the shallowness of his black community as well as his own family, complaining, "A man says, 'I got a dream' and his woman says, 'Eat your eggs.'" Meanwhile, Mama has her sights set on a nice house with sunlight pouring through the windows, so her poor little windowsill fern can get healthy and grow, much like her family itself. And Beneatha needs tuition to pursue her education, even as she dates two very different men: an idealistic and optimistic Nigerian student named Joseph Asagai (played with expansive good nature by Jason Samuel) and a wealthy young snob, George Murchison.

The Beck cast handles this rich material with overall panache, but not without certain shortcomings. As Mama, Conni Blair is an ample and commanding presence, tapping her family members like picture frames to gently straighten them. But when stronger action is needed, Blair doesn't cut her beats sharply enough, softening the rigidity of Mama's fierce moral code. Michael May conveys a simmering restlessness as Walter Lee, his one leg bouncing nervously as he writhes under the pressures of a dead-end job. But at times May loses his handle, particularly in a drunk scene when he seems instead to be in the grip of some undetermined physical handicap. Fine and consistent performances are turned in by Sonia N. Bishop, as the exhausted but persevering Ruth, and Evelyn Stewart, who pulses with edgy energy and newly ignited African American pride as Beneatha.

Director Margaret Ford Taylor brings a cohesive ensemble feel to the production and keeps the pace of the two-and-a-half-hour show clipping along, but some quirks are left unattended. In the role of obnoxious George, Jonathan Wray has every sarcastic facial expression and nitpicky gesture perfectly worked out, but then proceeds to use all of them twice as much as required.

Even with small imperfections, this Raisin delivers a stunning impact, particularly when the fate of Mama's money is revealed and when a representative from the Younger's new all-white neighborhood (a smoothly bigoted John Polk) tries to buy their house back. "You people wouldn't be happy there," he explains, with the smug, self-righteous myopia that has fueled racial prejudice for eons before. And ever since.