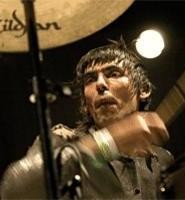 "The Matt Pond PA bio says, 'Matt Pond PA are, and shall remain, pleasantly indefinable,'" says Studio-A-Rama Director Melissa Rae Giglio. "WRUW has put ourselves in a similar position over the past 40 years, striving to set ourselves apart from what's normal and expected. The audience is bound to hear something they wouldn't normally go out to a club to see, and they're likely to discover a band."

The concert takes place at Case Western Reserve University's Mather Memorial Courtyard, at the corner of Ford and Bellflower roads, a block north of the Euclid-Mayfield intersection. Concertgoers can bring their own food and beverages (including alcohol for those over 21; ID is required). Snacks, soft drinks, and hot food are also available at the site. Coolers are checked upon entry, and glass bottles are prohibited. Those who can't make it off the couch can still catch the event, which will be broadcast live via the station's website, www.wruw.org.

The courtyard opens at 1 p.m., and the music is scheduled to end around 11:30 p.m. (See concert listings for complete lineup and set times.) In the event of rain, the concert will be canceled, and bands will play in the WRUW studio. Check the website for updates, or call 216-368-2208.

"The station does a great job supporting local and regional bands," says Bobby Latina, guitarist of country rockers the Jack Fords, who kick off the show at 2 p.m. "I've always wanted to play [the festival]. We're going to play a 45-minute power set -- power. It's going to be a party, for sure."

· Jason Popson -- the artist formerly known as J. Mann -- has reunited with former Mushroomhead bandmates for a new (216) record. Producer-drummer Steve "Skinny" Felton hopes the disc will be ready in 2007, and based on "On the Line," the one track they've recorded -- a stoner-rock assault with thrash intensity and deep-impact vocals -- it can't arrive soon enough.

· Infinite Number of Sounds guitarist-sequencer-songwriter Matt Mansbach has formally resigned from the band to relocate to Columbus. Sequencer-VJ Brent Gummow says that the instrumental band, a perennial nominee for Scene's Best Alternative-Electronic act, "will continue to write, record and perform. This will change the music, but not the mission. We're not necessarily looking for another guitarist. We are auditioning creative musicians of all sorts. We see the sound getting back to the less rock-driven material."

· Bone Thugs-N-Harmony have recorded vocals for both their upcoming CDs at Cleveland's Ante Up Studios (home of longtime collaborator Mike Seifert) with Steve Begala (Blazer, Boatzz).

· Funk godfather George Clinton will sign his new CD, How Late Do U Have 2BB4UR Absent?, at the Rock Hall's FYE Store (1 Key Plaza) at 4 p.m. on Thursday, September 14.