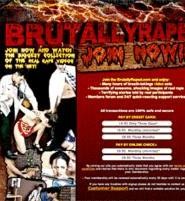 A series of collages emerge, showing men having their way with women who flinch in agony. Some are pinned down by their arms. Others are gagged and choked, their hair pulled. One woman is covered in blood and semen. None of them appears to be enjoying herself.

The page suggests that if you want to see more, "please visit SCREAM AND CREAM for clear crystal quality!"

Scattered between the images are links to more sites -- Forced Witness, Anime Rape, Raped Asians, Raped Russians. There's even something for the incest enthusiast.

That's where Ronnie Shelton comes in. Though he may be unknown outside Cleveland, to 28 West Side women, he was their rapist.

Shelton stalked women and attacked them in their homes from 1983 to 1988. In one case, a victim had just delivered a baby. When she told Shelton, he left. Terrified, she and her husband moved to a new house a few blocks away. Months later, Shelton tracked her down at her new address. "You owe me," he said before raping her.

When Shelton was finally caught, he received a 3,198-year sentence -- the longest in Ohio history.

His would seem a strange legacy to immortalize on the web. But it appears that some men are aroused by degenerates. And where there's an audience, there's always someone to serve it.

The Ronnie Shelton webpage has only one disclaimer. "Dear Surfer," it reads. "You just throwing your valuable time away for surfing the web trying to find free sexually oriented adult material. There is no such thing."

That's what happened to Fred Mens of Miningart.com.

In 2002, he and his wife, Pam, started a website dedicated to artwork based on the life of miners. "We more or less discontinued it, because we were busy with other activities," he says.

When the couple didn't renew their web address, "Alexander Morozov" scooped it up, according to Networksolutions.com, a site that tracks the ownership of domain names.

Morozov kept most of the site's original material, changing only a few pages. One of the new features was dedicated to selling pharmaceuticals. The other he renamed "Ronnie Shelton Ohio Rape Photos." Mens had no idea.

Miningart.com wasn't the only innocuous site to be procured by people promising reenactments of Ronnie Shelton's rapes.

The new owners all shared the same address in Denver, as well as the same e-mail account. (They did not respond to Scene's interview requests. )

The company claims to be based in Spain. But when Scene called its customer-service line, a woman who could barely speak English answered and said she was in Russia. (Pornocruto.nu's owners did not respond to Scene's interview requests.)

"Most of those sites are based out of Russia," says James, who doesn't want his last name printed. He's a sales rep for Adult Chamber, an online resource center that helps adult sites get more buck for their virtual bang. "We don't condone any of that. It's really horrible stuff. They're sickos in our view."

Stephen Yagielowicz, senior editor of XBiz, an adult-industry trade publication, agrees. "These kinds of things are disturbing -- especially the unsavory characters that produce this stuff."

Yagielowicz says that sites like Pornocruto.nu tend to be run by the Russian mob. "None of it escapes organized crime," he says. "The production quality, the kind of material coming out of there --it's disconcerting, especially when the models are making $10 a day and some of them might not be of age."

But why would the Russian mob want to use Shelton as its poster boy? "These companies will use current events or events from the news and embed those keywords in their websites, hoping that search engines will pick them up," says James. "It's simply a ploy to get traffic."

Thanks to Shelton and the pain he inflicted on 28 women, at least one computer-savvy Russian is cashing in.