Rapper Ray Jr. Provides the Soundtrack to the City 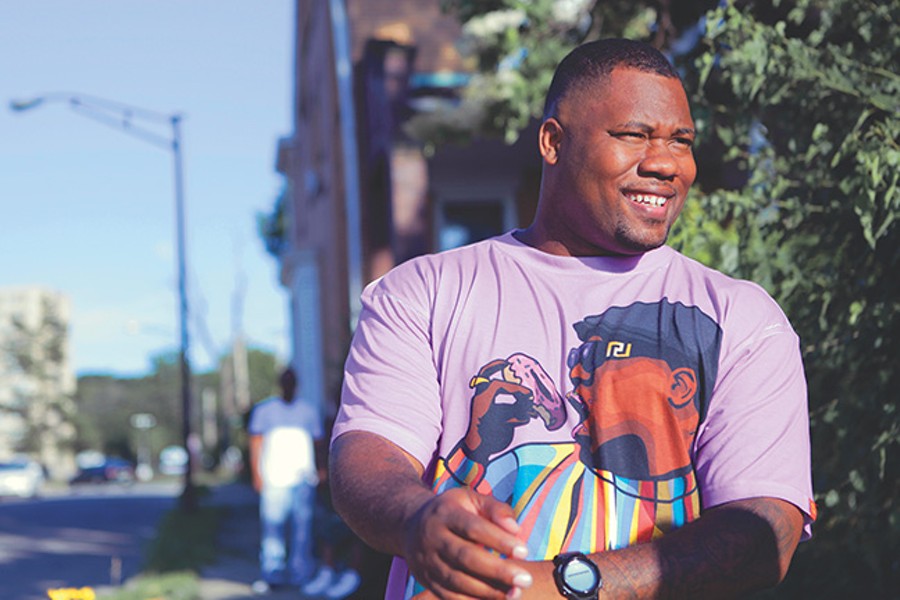 Ray Jr. is the undisputed musical mayor of East Cleveland. Talk to him for five minutes and count how many times he references his city. Everything he does in his career is designed to put Cleveland on the map. He's behind the group "Legit Paper," a team of young artists exclusively from the city, and his goal is to make all of them household names.

That's what makes his analogy about his recent free-agent signing to fellow Clevelander Machine Gun Kelly's E.S.T. Record label so jaw dropping. When asked about the decision to combine two "Chief Wahoos" under one proverbial teepee, Ray coyly says, "We pulled a Miami Heat on 'em!"

That's blasphemy at its highest, but it rings true to those familiar with Ray and the legacy he's made for himself in the Cleveland hip-hop scene. While MGK defines Cleveland to those outside the city, Ray Jr.'s music is the soundtrack to the peoples' lives within its borders.  When he started out as Young Ray and began to bang out anthems like "Where I'm From" and "I'm From E.C.," it became obvious that he was going to represent his stomping grounds well and become the spokesman of his ward.

But two years ago a song called "Sloppy" took him from just being the "Mayor of E.C." to being a diplomat. The piano riff behind Ray's voice bears a more than passing resemblance to Al Fat's "I Done Came Down,"" a song that many consider to be launching point for the artists that have gained prominence in its wake. Ray's track is a raucous ode to excess. Its anthemic hook is backed by the "O" chant made popular on the Beastie Boy's "Rhymin' and Stealin'" song some 25 years earlier. And yet, everyone in the Buckeye state knows the chant is an ode to Ray's home turf. Cleveland made it a hit, but the region made it an anthem.

It didn't take long for major labels to notice, and soon Def Jam Records came calling.  The signing struck many as odd; the label is usually known for its more traditional East-Coast ties, and while forays to the West Coast in the '90s and the South in the 2000s had proven successful, the signing of a Midwest artist raised eyebrows.

Ray learned quickly that he didn't have much support from the label. "They just didn't know what they had or the power of Cleveland," he says. Ray concedes that in hindsight, the label knew the city was hot and signed the hottest act in the city that was a free agent, largely to keep him away from other prospective suitors.

He was hurt emotionally but learned a valuable lesson. "There were people I really thought were my friends over there," he says. "One guy in particular that I thought was really looking out for me. He made me realize that this really is just a business.

Soon Ray was dropped from the label and was wondering what the next move would be.

And that's when he got the call from his own Dwyane Wade. Kells (aka Machine Gun Kelly) would probably cuss us out if he knew we were making all of these Heat references in article about him, but the similarities are in place.

"Kells was the first one to reach out to me when he found out about the label situation," Ray says. "It's a family thing. We already tour together, my camp is always around his, and it was just a matter of putting it all to paper."

And just like that, Cleveland's two biggest stars teamed up to make a run at the championship. Don't get it wrong. Ray isn't looking for MGK to start imposing his will creatively.

"He's not really going to work like that," he says. "He's gonna let me do my thing and be me on my projects."

"Me and him fight all the time," says Ray. "We fight about all kinds of things, but at the end of the day, that's family."

Ray doesn't find himself cynical about friends in the business either.

"The difference is, me and him were cool before," he says. "Like he'll just hit me up and we'll go ride around or whatever. It's not just a music thing."

Ray is set to release his first E.S.T. Project, the Elected II mixtape this month. Its first single "Champagne Spillin'" is an ode to the good times ahead. The track features national phenom Problem and has a decidedly Bay Area vibe. With a chaotic drumbeat and popping synths, it stands in stark contrast to the rollin' pianos on "Sloppy."

"My sound is just whatever I feel at the moment.  Right now I just feel like celebrating."