Alabama Sky is somewhat brighter the second time around.

Presented by Pittsburgh Public Theater at the O'Reilly Theater, Pittsburgh 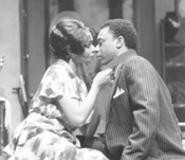 Pearl Cleague's Blues for an Alabama Sky defines the term "potboiler." The play takes its five characters through so many trials and tribulations that, to paraphrase a Thelma Ritter quip from All About Eve, "there's everything but the bloodhounds yapping at their behinds."

Cleague attempts to capture a desperate Harlem as it evolves from jazz playground to Depression wasteland. When this work played Karamu in a catatonic production in May of '99, the experience was like night duty at the House of Wax.

Now it has been dug up from a too fresh grave as the Cleveland Play House's contribution to Black History Month. Given a lush budget and far more loving care than it deserves, it has been resuscitated to a life it previously lacked. The theater has imported an expert cast of prestidigitators, who can make moribund clichés fly like little pink cupids. Skillfully jazzed up by Chuck Patterson's sizzling direction, it now offers the fun of a so-bad-it's-good MGM movie from the '50s. Specifically, with its Lorelei of a heroine wreaking havoc, devouring men's souls, and forever singing a sultry blues dirge, it brings to mind one of Hollywood's tarted-up desecrations of Faulkner.

Cleague's characters are stamped-out paper dolls. There is Guy Jacobs (Stanley Wayne Mathis), costume designer of the Cotton Club. He is desperately trying to design gowns to catch the eye of Paris diva Josephine Baker so he'll be whisked out of hard times and straight to gay Paree. Due to the demise of censorship, he no longer has to hide his attraction to men, but the arched eyebrows, sassy bon mots, and limp wrists are vintage Tinseltown pansy. Mathis does his best with an offensively clichéd role.

Angel, a fading, just-fired chanteuse of the Cotton Club, is played by Vivian Reed, an actress who specializes in playing red-hot mamas in shows like Bubbling Brown Sugar. Without Reed, this character would be another plaster-of-paris floozie in a long line that stretches from Jezebel to Carmen Jones. Yet Reed, in the tradition of Lena Horne and Eartha Kitt, is a torch singer whose flame never wanes. Her intense musicality brings scat and rhythm to the most mundane piece of dialogue. Giving a performance that's a cornucopia of growls and purrs, she turns Cleague's dross into leopard skin.

The play takes us into August Wilson land, where descendants of slaves break into factions -- some wrapping themselves in old-time religion, others embracing the syncopated temptations of urban life.

When these two factions come together -- as when the Alabama farmer takes up with the capricious torch singer -- lives explode like colliding meteors. What would be gripping in a well-edited two hours becomes exhausting in two hours and 45 minutes (including a tiresome number of blackouts).

Famous names, such as Langston Hughes, Margaret Sanger, and Adam Clayton Powell, are dropped every few minutes for obvious period effect. It's a vinyl variation on Chekhov's Three Sisters, with everyone unfulfilled and yearning to be somewhere else.

Where Wilson has a way of turning his characters into brooding totemic firebrands speaking a rich poetry, Cleague's figures seem to speak in pamphlet argot. A great cast can do only so much with such purple prose.

While the Play House uses its resources to attempt a reincarnation of a play that deservedly expired less than two years ago on a stage 10 minutes away, our neighbors at the Pittsburgh Public Theater have landed the catch of the season. By Jeeves is the first charming musical by the king of bombast, Andrew Lloyd Webber.

Lloyd Webber is a multi-million-dollar chameleon. When he works with a cockney pop rocker like Tim Rice, he writes irreverent religious epics, turning the testaments into sock hops. Put him with a hack, and he'll transform a perfect comic tragedy like Sunset Boulevard into a singing pachyderm.

But put him with Alan Ayckbourn, a consummate playwright with 55 plays to his name who also is a superb director and lyricist, set them to musicalizing P.G. Wodehouse, Britain's erudite master of madcap misadventure, and you'll get a show as elegantly tuxedoed and rhymed as a Noël Coward confection.

Bertie Wooster is England's answer to Jack Benny: a beloved fool, two parts vanity and one part knight errant. Where Benny has his Rochester to get him out of his magnificently constructed scrapes, Wooster has his manservant, Jeeves.

Anyone with a predilection for Anglo-Saxon whimsy -- ranging from Chaucer's Canterbury Tales to Monty Python -- owes it to himself to make a pilgrimage to Pittsburgh's O'Reilly Theater. The only catch is that, on the return journey, they may mourn Cleveland's lack of an arena theater of such intimate proportions and limitless possibilities.