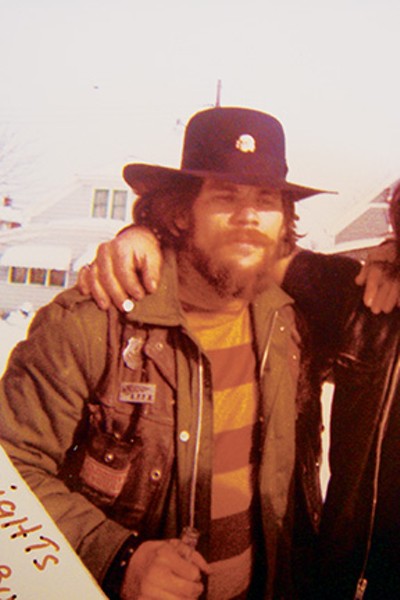 It began back in 1975 with the Sigley bombings.

"I was a very dedicated Member," Crouch wrote in an email to an acquaintance in February 2013. "But with all that happened over the years, and sitting there with my 18-month-old child in my lap the next morning [after the bombing] and watching the news on TV, when I saw the deaths of the Sigley children, my wall of Dedication began to crumble. Hardly a day goes by that I don't think about it. I didn't think of myself as a Snitch—I thought of it was Switching."

In a 19-page letter to a Plain Dealer reporter dated 1988, Crouch penned a manifesto of sorts, an emotional and detailed personal essay of the John Teller variety that lays out his deep-seated problems with the Hells Angels and details what was going through his mind in 1981.

"For you see, the MC that once stood for Motorcycle Club would now be more suitable to stand for Murder Cult. For you see there is no Brotherhood left among this organization's membership. For over the years all of the basic ideals this once Brotherhood was based on were undercut by greed. Always trying to believe that it would one day live up to expectations as we lied to ourselves in the waiting and ignored the hundreds of bodies left in our wake. The simple fact is that this so-called brotherhood self destructed long ago because of greed, hate and the evil borne from it."

Later in the screed, Crouch says he spent most of the summer of 1981 riding across the country—some 8,000 miles he writes—trying to "decide what to do with all the reality ricocheting in my head."

He writes that he met Sonny Barger in Nashville at Waylon Jennings' house and confided his feelings to the Hells Angel leader. "I suppose I knew I was grasping at straws, but as it was, I figured Sonny was the only one who could call enough support together from the membership in order to stop the murder cult."

Crouch continued that Barger told him something along the lines of "Fuck those idiots that still think there's something worth giving their lives for like Brotherhood and all that silly Shit. Use it—use them—get yourself all the millions you can before the whole thing comes down on us."

The ATF file notes in 1981: "At this time, Crouch revealed a history of events that had occurred, involving HAMC members, virtually without any attention being brought to the Hells Angels since the Polish Women's Hall riot."

And in 1981, his wife and children — the Crouch family — including that young daughter who sat on Crouch's lap, became history themselves.

Jackee Taylor, then named Jacqueline Crouch, remembers the funerals of Hells Angels members in Cleveland vividly. There was drinking and smoking, carousing, guns blasted into the air and motorcycles peeling through parking lots. They would go all night, alternating between tears and laughs.

Taylor, born in 1974, was the oldest of three children Crouch had with his second wife. (He was married briefly down in Texas in the early 1960s and had one child.)

There was nothing strange to Taylor about her father's life in Cleveland.

"I just knew that his friends and him all drove motorcycles," she says. "I saw the guns and knives and the drugs—my father called cocaine his 'medicine.' But he was a good father. I had no idea that he was a monster. My mom, who had been a straight-A student and very proper lady before meeting my father and was a nurse, thought she could change him with love. She thought if she gave him his son it'd get better, but it didn't."