In the slick and handsome Pirates of the Caribbean, more is somehow less.

July 09, 2003
comment
Pirates of the Caribbean: The Curse of the Black Pearl 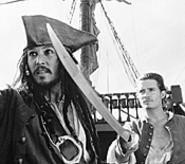 To prepare for reviewing Pirates of the Caribbean: The Curse of the Black Pearl, I did the obvious research: I watched Yellowbeard again. Yes, yes, indeed -- can't do without Fairbanks as The Black Pirate and Flynn as Captain Blood. But when appraising a new comedic pirate adventure, it's important to consider how far we've come in the 20 years since Graham Chapman and company set their snarling, anarchic watermark on the genre. In short, that'd be not far enough, matey.

Vaguely based on the wonderful theme-park attraction beneath which Walt Disney is rumored to be cryogenically frozen, this Pirates is jaunty, exquisitely designed, gorgeously lensed -- and too routine by half. Like Mel Damski's Yellowbeard, it features a Polish-named director (The Ring's golden Gore Verbinski), a pirate-father/good-son conflict, a chaste girl-prize, snooty British men in wigs and tricorns, and the inevitable tall ships, zipping across tropical seas in search of treasure. Both movies even boast significant non-attendees for their respective premieres, with Marty Feldman croaking on bad shellfish in '82 and JAG star Trevor Goddard (as Pirates henchman Grapple) O.D.-ing in Hollywood just last month. Yet here the similarities end, for the crusty, clunky, Pythonesque Yellowbeard took more risks and no prisoners, thus pulsing with more life.

This isn't to say that Pirates -- a fine successor to Polanski, Geena Davis, and Muppets -- is without its charms. Its serviceable plot involves sweet pirate Captain Jack Sparrow (Johnny Depp as Keith Richards doing Dudley Moore's slur), who sails into the tropical colony of Port Royal aboard a delightful visual gag. Tumult ensues as he saves prim Elizabeth Swann (Keira Knightley), only to be harassed by her benevolent blacksmith suitor Will Turner (Orlando Bloom) and stern governor father (Jonathan Pryce), whose red-coated minions, led by bland Commodore Norrington (Jack Davenport), are happy to lynch a man with "P" branded on his forearm -- even if the initial could just stand for Depp's former rock band.

Naturally, there's some blithe swashbuckling, prepackaged for live reenactments at Disney theme parks, and then diabolical horror arrives in the form of Geoffrey Rush. As Captain Barbossa, "a man so evil that hell itself spat him back out," Rush drives his multi-culti louts on the pirate galleon Black Pearl toward a wicked-looking doubloon, held by Elizabeth since a childhood misadventure (covered in the prologue). Rather like a fart in the bathtub, the diabolical coin sends out a rippling energy wave that summons Barbossa and his scallywags, who slaughter assorted extras and gently klonk Will unconscious. They then sail away with both the doubloon and hostage Elizabeth, believing that she can assist them in a long-awaited collusion that will look like ritual sacrifice at a Limp Bizkit show -- which is as appealing as it sounds.

The rest of the movie is a chase -- and a long one at that -- during which cunning Jack and earnest Will grudgingly team up and hijack Norrington's sleek Interceptor (the real ship Lady Washington and her real crew) to pursue the conspicuous Black Pearl, with its sails of shredded black pantyhose, while Norrington and Governor Swann tail them in the less flamboyant Dauntless. The bad pirates are afflicted by a slightly inconsistent Aztec curse that gives genius effects-supervisor John Knoll (the Star Wars prequels) plenty of latitude for splendidly spooky images, and there's a tedious surplus of polite violence, until everyone gets their makeup refreshed and modest blood is shed in the rousing climax.

And now a paragraph for the girls. Orlando Bloom is the greatest actor who ever lived. He sure is hot. His buttocks are amazing. To caress them would be to visit heaven. We must buy what we are told to buy.

The mortal cast members are also enjoyable as well as extremely well attired by superb costume designer Penny Rose. Rush is splendid as the nasty bastard, with his trademark overacting nicely matching the material. Pryce smartly delivers his stuffy English patriarch again, and the assorted pirates grunt and growl with aplomb -- even the black ones who are, unfortunately, thrown in like set-dressing.

But this movie, like many others, belongs to Depp, God love him. At the tender age of 40, the wunderkind Kentuckian has already packed in more iconic roles -- rocker, gypsy, cowboy, monster, romantic, cop -- than most actors manage in a lifetime. His wry, dreadlocked, 'do-rag-sportin' rogue is a constant pleasure, and indeed, Captain Jack will get you high tonight.

The movie is another story. I love it, but in much the way I managed to love The Phantom Menace -- in spite of its bloat, swaggering self-importance, and largely neutered characters. The rapier wit of superstar writers Ted Elliot and Terry Rossio (Aladdin, Shrek) seems curiously pedestrian (their concept of gallows humor involves parrot poop), and here they've concocted the incredibly original premise of having to return a small gold trinket to its rightful place in order to overcome great evil. Gee, where'd they get that? Unlike Peter Jackson's The Lord of the Rings, though, Pirates suffers noticeably in the excision of its source material's bountiful whimsy, which is too bad.

If you're up for rich atmosphere, copious money shots, and decorative talent, Pirates won't disappoint you. But before setting sail, its creators should have refreshed themselves with another Python project from '83, Terry Gilliam's short "The Crimson Permanent Assurance" -- an allegorical gem, in which accountants turn piratical and sail around in their building, committing atrocities. A similar scourge seems to have afflicted Pirates of the Caribbean, only behind the scenes, aggressively, and very much without the press kit's hard-sell suggestion of "an irreverent wink."