Reeling in the Beers

Slobberbone is the best bar band in America. Here's proof. 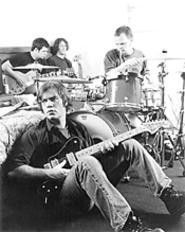 When Brent Best laughs, it sounds like the slide racking on a shotgun. Sounds that way when he coughs, and sometimes when he sings. It's a little worse than usual right now; he and his band, Slobberbone, were on the road in Europe for a few weeks and have been home for only a few days. Touring means plenty of late nights and last calls -- cigarettes by the carton, alcohol by the case, colds by the time they get back. Because he's gotten sick so many times, Best has come up with a name for what ails him: "the European hacks."

Best is at home in Denton, Texas, and he's got a few more days to rest and recoup before the cycle starts all over again. Though he's still recovering from Slobberbone's last tour, Best is excited about the one coming up. He's eager to show off Slobberbone's latest album, Slippage.

And it's a good one, too: a rock record ("Springfield, IL." and "Write Me Off") that knows it doesn't always have to rock ("Sister Beams" and "Back"). It's classic rock if you mean "timeless" and modern rock if you mean "now." Best tells better stories than most -- check the regretful "Butchers" who can't "get the bloodstains off their hands," if you want to know what it would sound like if a rock show broke out at a Larry Brown reading -- and the band does much more than fill in the gaps behind him.

If Slobberbone is not America's finest bar band, then it's on the short list. Best and company (guitarist Jess Barr, bassist Brian Lane, and drummer Tony Harper) are the legitimate heirs to the Replacements' shit-hits-the-fans sovereignty: talented, literate, and occasionally obliterated.

You can hear that on Slippage more than any of the group's previous albums, Everything You Thought Was Right Was Wrong Today, 1997's Barrel Chested, and Slobberbone's 1996 debut, Crow Pot Pie. Those records -- especially the band's first two -- were, in some ways, Polaroids that weren't fully developed. This disc, on the other hand, is leaner if not meaner, ditching Everything You Thought's session musicians to focus on the guitar-drums-bass format by itself.

The first thing to go, Best says, was the banjo. "We've got the crappiest banjo in the world, the most temperamental thing to make work right every night," he says. "It was like, screw it, you know? The songs for this one were just kind of more subtle . . . musically and lyrically. I wanted to streamline, instrumentationwise, but I still wanted the songs to feel varied. It's easy to get this broader palette of sound when you're using a bunch of different acoustic instruments in addition to electric instruments and everything. But this one, I tried to do it more by varying the sounds of guitars and stuff."

Danbom did drop by to add his keys, and there are a few other guest shots here and there. But the quartet cut the rest of the record live in the studio -- Rumbo Recorders in Canoga Park, California, "the '80s hair-metal place," according to Best. Don Smith sat at the controls. If you don't know Smith's name, you most likely know his work. He's recorded albums by Bob Dylan, the Rolling Stones, and Tom Petty, as well as Best's favorite rock record, Bash & Pop's Friday Night Is Killing Me, the only album by Tommy Stinson's post-Replacements outfit.

"There's a reason why the Stones and Petty and all those guys use him," Best says. "Because he's not the producer who tells you, 'Okay, this is how you're going to sound.' Whatever you're doing soundwise, he knows how to get it all onto tape without screwing it up. There were times where I wanted guitars louder than vocals, and most big-time producer guys would scoff at that, call your label guy on you, tell them what an asshole you're being. But Don would be like 'Yes, I agree.'"

Obviously, Smith was right to trust Best and the band's instincts. Despite Best's kind words for Smith, they could probably make records without anyone's help if they wanted to; after four albums, this bunch knows what works for them and what doesn't. Even the group's cover of the Bee Gees' "To Love Somebody" makes sense -- once you hear it, at least. The funny thing about that? Best didn't even know it was a Bee Gees song.

"We'd just started doing it, actually, a few weeks before we went to record," Best says. "[Pleasant Grove's] Joe Butcher had been playing steel guitar with us. And I had a version of [the song] from a Flying Burrito Brothers album. I didn't even know it was a Bee Gees song until we played it with Joe. He's like, yeah, it's a Bee Gees song. 'Ah, shit. Now we gotta put a damn Bee Gees song on the album.'" Best laughs.

"But I like it. With everybody making a big deal out of this being a rock and not very countryish album, I kinda like the idea that one of the most rootsiest things on the album is a Bee Gees cover."

About that last part: Slobberbone's never been a country band. No matter how often it's been written up in No Depression. No matter how much twang people got for their buck on Crow Pot Pie. (They had a fiddle player back then, and they'll never be able to help growing up in Texas.) Slobberbone has always just made music without ever worrying where it'll end up or which genre will claim the group this time.

Because, as they've found out, most people will come around to their way of thinking eventually.

"It's not like we've ever truly considered ourselves even remotely country," Best says. "But I guess with a big majority of fans, that had always kind of been the thing. You know, early on, when the alt-country thing had just kinda blown up, that was something we would get slammed for back then. Being too loud and too sloppy. Not enough 'true country' or whatever, which we didn't give a shit about. But everything we got slammed for back then, I swear to God, I've read reviews and articles now from the same authors, people in Chicago or somewhere, and everything they slammed us for back then is what they praise us for now." He chuckles. "I'm glad we never wavered."