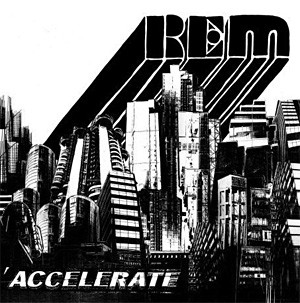 Accelerate is a perfect title for R.E.M.'s best record in a decade. Not that it's had much competition in that time. Most of the CD, like the single "Supernatural Superserious," sounds like the band covering itself, but Accelerate's sturm-und-strum assault carves out its own niche in the group's catalog. Eight years of Republican rule have left the Georgia band seeing red on its 14th album. The forgettable adult-contemporary blandness of its last two CDs has thankfully evaporated. So has guitarist Peter Buck's trademark jangle, replaced here by a steady wash of overdriven chords.

With Buck off his leash, Accelerate rocks harder — and more often — than anything R.E.M. has recorded since the '80s, albeit in a more clunky fashion. Michael Stipe's lyrics and vocals have more fire and clarity than ever — aiming at the ruling party ("Man-Sized Wreath"), the people who voted for it ("Until the Day Is Done"), and himself ("Hollow Man"). He finds hope in Texas, of all places — marshaling his resolve in "Houston." Over a weaponized keyboard and a wave of six-string distortion, Stipe half-sings, half-speaks: "If the storm doesn't kill me, the government will/I've got to get that out of my head/Today is a new day, and the coffee is strong." R.E.M. no longer feels fine about the end of the world, and Accelerate is the sound of the band back in the fight, till the day when Stipe can merely sing, rather than worry, about Armageddon.