Justice on demand -- for those who can afford it. 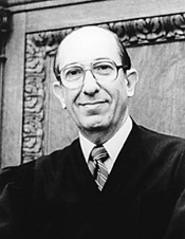 Judge Richard Markus recalls the exact moment he lost his audience, made up of members of the Ottawa County Bar Association. It happened when he mentioned private judging. Faces went blank as cluelessness seized the room.

"They didn't have any idea what I was talking about," Markus says, chuckling. "And they were all sober, which is saying something up there by Put-in-Bay."

He's grown accustomed to the reaction. Few have heard of private judging, and fewer still have explored what remains a little-known niche of Ohio's legal system, where litigants pay a retired judge to hear their dispute. On the list of most obscure state laws, the "rent-a-judge" statute ranks just above the ban on breast-feeding in public.

In simple terms, private judging provides justice on demand for those who can afford it. After both parties agree to hire a particular judge, their case can get under way anytime, anywhere -- reducing the delays that turn a trip to court into Fear Factor meets Survivor.

"If someone were waiting for trial, it could take a year or more," says retired Judge Stanley Fisher, who formerly sat on the Domestic Relations bench. "If they pick a private judge, it could be a matter of days."

Markus and Fisher belong to the fraternity of 15 retired Ohio judges -- defined as justices who step down from the bench, as opposed to those ousted by voters -- who now serve privately. They wield the same authority as their public counterparts -- ordering arrests, convening juries, awarding damages, granting divorces. Their rulings carry the same weight as any delivered at the courthouse, only they're usually heard in a lawyer's office or a bar association building.

There's another distinction: Private judges charge for their services. Markus, a former Common Pleas and appellate judge in Cuyahoga County, advertises his $275 hourly rate on his website. It's a fee similar to what the onetime attorney used to bill clients.

Given the tax dollars devoured by the courts, it's reasonable to wonder why anyone would fork over more money for their own personal judge. The short answer: In a fast-food nation, private judging offers verdicts to go.

Public judges are docket slaves, forced to work dozens of cases. Private judges can devote their full IQ to a single dispute, be it between warring corporations or divorcing couples. They're able to answer attorneys' questions via phone and e-mail, schedule meetings on short notice, hold hearings at 7 a.m. or 7 p.m. "It's much easier to line up witnesses and experts," says Columbus attorney Hans Scherner.

Such convenience makes private judging tailor-made for well-to-do couples headed to Splitsville. Judge Donald Cox, who retired from the bench in 1993, owns Judicial Alternatives of Ohio in Jackson. Two Fridays a month, he makes the 90-minute drive to Columbus and visits 10 to 15 lawyers' offices to grant divorces. "It's like a paper route," he jokes.

Cox charges a $100 flat fee, whether the hearing takes 10 minutes or an hour. His upscale clientele has included state lawmakers, fellow judges, and business executives. Cox remembers one CEO who couldn't be bothered to make the short drive to his lawyer's office. So Cox went to him. "He was thrilled he could get a divorce without ever leaving work."

Cox's casual approach -- no banging of gavels, no blistering of counsel's ears -- also wins points among lawyers. "Instead of saying, 'You moron' in the middle of a courtroom, you can handle things privately," he says. "Attorneys appreciate it when you don't make them look stupid."

By virtue of juggling 20 to 30 divorces a month, Cox may be the busiest of the state's rent-a-judges, since fewer than a dozen other civil cases go to private judges every year. Those suits generally involve companies that regard a judge's fees as pocket change or hospitals seeking to keep malpractice claims quiet. So rare is private judging in Cuyahoga County that Clerk of Courts Gerald Fuerst admits, "We don't even hear rumors about it."

A private judge's decision can be appealed; by contrast, a court-appointed arbitrator offers the final word. While arbitration typically costs more -- an ongoing case handled by Cleveland lawyer James Niehaus required parties to ante up a $14,000 arbitrator's deposit -- the expense stops there, since no appeal can be filed.

There's also the attitude that hiring a judge makes as much sense as buying air. "We elect judges and pay their salaries," says David Webster of the Cuyahoga County Bar Association. "Why should people pay more for something that is their right through the court system?"

"Most clients are traditionalists," adds Cleveland attorney Randy Hart. "If they're the plaintiff, they're looking for their day in court."

Cynics supply a different theory: Lawyers avoid private judging for fear that a case will end too quickly, preventing them from racking up billable hours. Hart disagrees. "Most attorneys will tell you that you don't make money off one case. The thinking is 'If we can get this case resolved, we can get another case with that client.'"

But for all the naysaying, Cox insists private judging will take off, once more couples realize they can settle their personal affairs outside a public courtroom. With that in mind, he hopes to bring his drive-thru divorce service to Cincinnati and Cleveland.

"You have to be as user-friendly as possible," he says. "If people think, 'Let's get Judge Cox -- he'll do anything,' that's fine by me."