Infamous fails to improve on Capote. 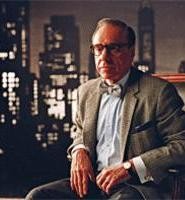 Had Infamous been the first version of the story to hit theaters, one might have regarded it as a very minor triumph -- in no small part because of Toby Jones' performance, which makes up in warmth for what it lacks in weight. Jones, who is 39 but has always looked all of 19, seems somehow closer to the Capote who survives on old talk-show appearances and in biographies -- the gentle, elegant, protective, and impish troublemaker, storyteller, and partygoer/thrower who only seemed larger than life.

Hoffman always looked too big to play Capote -- more like a swollen version of the writer, an interpretation cobbled together from overblown myth. Jones has the lightness of a sprite; you can believe that this guy might have worn pink lingerie while entertaining law-enforcement officers in his hotel room, as a Kansas Bureau of Investigation officer claims in George Plimpton's 1997 oral history (which McGrath uses as his source).

For a good while, Infamous is nothing like its predecessor; the first half of Capote did not show such high spirits and such willingness to laugh at itself or its protagonist, who floats through McGrath's movie like a champagne bubble. The first half plays like a gossip column in which the boldfaced names have been brought to life by other boldfaced names, with Isabella Rossellini as Condé Nast editor and photographer Marella Agnelli, Sigourney Weaver as media mogul missus Babe Paley, Juliet Stevenson as Vogue editor Diana Vreeland, and Hope Davis as Slim Keith, a former Mrs. Howard Hughes and one of Capote's myriad confidantes. Sooner or later, McGrath puts all of them in front of the camera as talking heads decorating a talk-show set; he's aping Plimpton here, who offered in lieu of narrative a collection of unverified and likely hyperbolized anecdotes.

Joining their ranks is Nelle Harper Lee, played by Sandra Bullock with far more weariness than Catherine Keener brought to Capote. She's given long monologues, to the point where the movie for a while becomes more about her own failure to follow To Kill a Mockingbird than Capote's inability to write anything of consequence after In Cold Blood. Here Bullock proves at last that she's more of an actress than her choices suggest; would that she were allowed to devote an entire film to Lee's story. After all, we know Capote's by now.

The second half of the film just follows in Capote's footsteps, from the prison cell to the gallows to a career left in talk-show tatters. Turns out, there was only so much blood left in the rehashing of In Cold Blood. The sucker's a stiff now; time to move along.