Return of the Kings 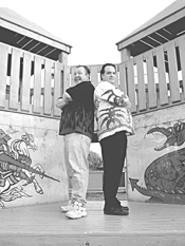 Jeff Blanchard and Don Mitri want to kick it old-school. The local comedy vets -- Blanchard founded Cabaret Dada, Mitri was Tony in the long-running Tony n' Tina's Wedding -- have teamed up for a two-man improv show, Whose Mess Is This?, that recalls an earlier, simpler time. "We're song-and-dance men," Blanchard says. "But we can't sing or dance. So we engage the audience in an hour-and-a-half conversation."

Whose Mess Is This? (which opens Friday at Playhouse Square's Kennedy's Down Under) is a mix of staged skits and audience-fueled interplay. "It's a variation on the style," Blanchard explains. For example, while one of the guys is fielding suggestions from spectators, the other is preparing the stage. "It's a culmination of everything we've done the last 15 years."

Whatever the outcome of the show, Blanchard says, his comedy-troupe days are behind him. "Don and I play on a certain level," he says, referring to their skill and their offbeat show. "It's a very exclusive club, and we want to keep it that way." Whose Mess Is This? opens Friday and runs through May 29 at Kennedy's Down Under, 1511 Euclid Avenue. Show times are 8 p.m. Thursday and 8:30 p.m. Friday and Saturday. Tickets are $15; call 216-241-6000. -- Michael Gallucci

This week's Center Stage Variety Show Series at Lakewood Public Library -- which gathers homegrown talent and showcases it, Ed Sullivan-style -- is all about the tango. "We are doing something very extensive with this series," says library director Ken Warren. (The variety shows take place every first and third Saturday through December. Upcoming performances include "School's Out Forever" and "Red, White, and Blues.") And while Saturday's show is primarily about entertaining an audience, don't be surprised if you learn a thing or two. "Argentine tango [is] not to be confused with American tango," says Gary Hoopengardner, director of the Modern Arts Coalition of Cleveland. "It's pure body movement between two partners that move together so well." More scintillating fun is provided by Rumba Tabaco y Café and the Mad Mountain Juggler. "It all fits in with this whole variety, oddball show," says co-coordinator Sam Phillips. It starts at 7 p.m. at Lakewood Public Library, 15425 Detroit Avenue. Admission is free. Call 216-226-8275 for more information. -- Lucy McKernan

Don't Pass This Dutch
Alden Tyrell and DJ Overdose light it up.

Unlearn last year's 'lectro lecture -- Tyrell and Overdose's funky kick-drums and stripped beats are closer to Afrika Bambaataa's groove-oriented minimalism than to Adult's ultrastylized romps. The Holland-based DJs headline Saturday's Displacement electronic-music festival, which also includes knob-molesters Auxmen and trip-hoppers Aeris (among others). Two stages will be filled with music that reflects our city, says Jeremy Bible, founder of sponsor experimedia.net. "Electro is machine music with soul. And in an industrial city like Cleveland, people can relate to the constant feeling of moving through the day as if in a giant living machine." It happens from 4 p.m. to 1 a.m. at Pat's in the Flats, 2233 West 3rd Street. Admission is $10; call 216-621-8044. -- Melody Caraballo

The nude hippies that filmmaker Robb Moss profiled in his 1978 short Riverdogs have grown up. In the reflective The Same River Twice, he plays catch-up with five of his former commune mates. Two are small-town mayors, one's a radio-talk-show host, and another is an aerobics instructor. Only the group's spirited leader still lives off the land. River runs at the Cleveland Cinematheque (11141 East Boulevard) at 9:45 Friday and 8:15 p.m. Saturday. Admission is $8; call 216-421-7450. -- Michael Gallucci