Return of the Steelhead

Fishing group talks about the ones that didn't get away. 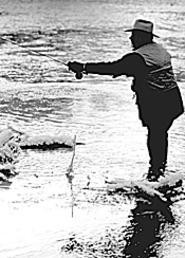 The 60-mile trip to Kirtland for their monthly meetings got old really fast for Bill Grake and his fishing buddies from Lorain County. So in January, they founded the Firelands Fly Fishers. In less than a year, the group has grown to 40 members, who meet on the second Wednesday of every month to chat about fly-fishing and listen to experts talk about everything from bamboo fly rods to Ohio's steelhead-fishing program. "That's good around here, because the steelhead fishing in the rivers has gone great," says Grake, the club's president. "Six years ago, everybody that fly-fished literally left the state." Now they flock to the rivers for a day of catch-and-release fishing for eight-pound steelheads. "There are guys who whine that 'I only landed eight, nine fish,'" says Grake. "If they're not landing 40 fish in a day, they think it's a bad day. These guys get real spoiled." The group meets from 6:30 to 9 p.m. Wednesday at the French Creek Nature Center, 4530 Colorado Avenue in Sheffield Village. Admission is free; call 440-934-5345. -- Cris Glaser

For the Hill family, beating the crap out of each other qualifies as quality time. "[My wife and I] thought karate would help with [our two sons'] attention problems," recalls Mentor Karate Institute's owner Tom Hill. "But the teachers got us all out on the mats." That was 10 years ago. Today, the Hills are all black belts, and on Saturday, they're hosting a Black Belt Extravaganza. "It's a good chance to see what goes into obtaining a black belt," says Hill. In addition to all the hi-yah!s and broken boards at the exhibition, pros will show kids how to protect themselves from bullies and shifty grown-ups alike. Says Hill: "This is the kind of sport that builds self-confidence and self-esteem in ways other sports often don't." Action happens from 1:30 to 3:30 p.m. at the Andrews School for Girls' Andrews Auditorium, 38588 Mentor Avenue in Willoughby. Admission is $5; call 440-951-0463. -- Lucy McKernan

At Saturday's Cleveland Metroparks Cross-Country Ski Primer, a specialist will show newbie snow enthusiasts the proper way to trek through long stretches of ice-covered land while using a pair of poles. There'll also be a short history of the sport, covering all its variations through time (it's been around for more than 4,000 years). Most important, appropriate gear and clothing will be discussed -- because looking good is just as important as keeping the bones shatter-free. Prime up from 10 to 11:15 a.m. at Rocky River Nature Center, 24000 Valley Parkway in Rocky River. Admission is free. Call 440-734-6660 for more information. -- Michael Gallucci