Reunited, and It Pays So Good

A bunch of old farts got back together last year. And they made gazillions. 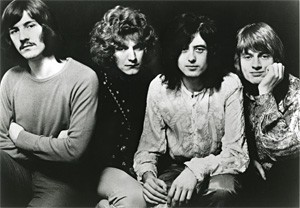 Hell froze over again last year. Countless bands that called it quits 15, 20, and 25 years ago got back together for lucrative albums and tours. Fans can thank a decade of steadily shrinking CD sales for all these reunions — dwindling royalty checks mean fewer household items (like bathtubs, refrigerators, and stripper poles) plated in gold. Here are six veteran groups that had a pretty stellar 2007.

Led Zeppelin
Curtain call: The three surviving members of Led Zeppelin (with their dead drummer's son filling in) reunited for the first time in two decades to play one show. More than a million fans signed up to snag one of the 20,000 seats available for it.
Timeliness: While the band hasn't toured since John Bonham's death in 1980, Robert Plant and Jimmy Page have recorded and hit the road together a few times over the past dozen years, somewhat diminishing the allure. Page also played Zeppelin tunes with the Black Crowes in 2000.
Continuing Relevance: You don't have to be a member of Wolfmother to dig Zep. As Plant proves on his terrific new album with Alison Krauss, there's still juice in the old tank.

The Police
Curtain call: Flaunting a showman's flair that rivals Sting's overinflated ego, the Police announced its return during last year's Grammys broadcast.
Timeliness: A 20-year absence and Sting's blah solo career fed into growing interest — to the eventual tune of $240 million.
Continuing relevance: It's hard to justify the hoopla surrounding the band's five albums. Sure, there are some great songs on them, but the total catalog just doesn't dig very deep.

The Eagles
Curtain call: There have been a few new songs on various compilations and live DVDs over the past decade, but Long Road Out of Eden marks the first Eagles studio album in nearly 30 years. Don Henley has hinted at yet another farewell tour this summer.
Timeliness: A dozen years after their record-breaking Hell Freezes Over Tour, people still love the Eagles. Eden (which is sold exclusively at Wal-Mart) debuted at No. 1 and checked in as one of 2007's best-selling CDs.
Continuing relevance: Each member is at least two decades removed from his last radio hit. But that hasn't stopped Henley from bitching about cell phones, global warming, and other things making the planet so damn unbearable for graying grandpas.

The Jesus & Mary Chain
Curtain call: A decade after the combustible Reid brothers ended their 15-year collaboration, their little sis brought them back together. A reunited Jesus & Mary Chain played Coachella a week before her debut album (as Sister Vanilla) came out.
Timeliness: The band's influence spans U.S. indie rock (Dinosaur Jr., Sonic Youth) to British shoegazers (My Bloody Valentine, Spiritualized) to new-wave revivalists (Black Rebel Motorcycle Club et al.).
Continuing relevance: While their blend of Velvet Underground-like narcotic fuzz and Brill Building pop hooks is hard to resist, the Jesus & Mary Chain have never really been innovators. If their contribution to their sib's CD is any indication, Jim and William Reid apparently haven't had a new idea since leg warmers were in style.

Van Halen
Curtain call: After announcing a reunion with David Lee Roth a year ago, Eddie Van Halen missed his band's induction into the Rock and Roll Hall of Fame two months later, because he was in rehab. Representing Van Halen at the ceremony were Sammy Hagar and Michael Anthony — neither of whom is in the band anymore.
Timeliness: It took Van Halen years to realize that Diamond Dave was their first, best, and only singer. Even though Hagar beat Roth to a reunion tour in 2004, Roth doesn't mind sloppy seconds. What else is he gonna do? Talk radio sure doesn't want him back.
Continuing relevance: The group's six-album run with Roth from 1978 through 1984 helped define the era. And now that guitarist Eddie is sober, hopes are high for a revitalized Van Halen to wash the sound of wimpy radio rockers like Daughtry from our ears.

The Stooges
Curtain call: Even though Iggy Pop recorded several songs with original Stooges Scott and Ron Asheton in 2003, he was slow to capitalize on the garage-rock revival. The band didn't make its official return until last year's The Weirdness CD and subsequent reunion tour.
Timeliness: Iggy has never been particularly canny about making the most of his legacy. He released his only decent album of the '90s before Nirvana broke, and the New York Dolls beat him to the punk-pioneer comeback trail by a year.
Continuing relevance: While Iggy's face looks like it would make a nice boot, very few singers possess his stage presence and iconic power. The Weirdness smokes in concert. But fans hoping for a great new studio album by the reunited band shouldn't hold their breath.

Honorable Mentions
Rage Against the Machine: With Audioslave in the shitter, Tom Morello and crew accept Zack's booty call — only after assuring him that's all it is.

Genesis: A nonstarter without Peter Gabriel. Is anyone really dying to hear "Invisible Touch" again?

Smashing Pumpkins: Besides original drummer Jimmy Chamberlin, isn't this just another case of Billy Corgan playing with himself?