Revenge of the Bricks 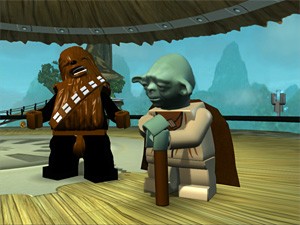 TOP PICK — LEGO Star Wars: The Complete Saga (LucasArts)
Nothing beats blasting Darth Maul to a pile of small, colorful plastic bricks. And now that this terrific video-game series (with brand-new levels and characters) has gone next-gen, it's even more of a blast — especially on the Wii, where gamers wield their controllers like lightsabers.

CD — Joy Division reissues (Rhino)
The gloomy post-punk band's two albums (Unknown Pleasures and Closer) plus a collection of leftovers (Still) receive the deluxe treatment on these two-disc sets, which are loaded with bonus live tracks. They're tied to Control, a biopic about singer Ian Curtis, who killed himself on the eve of the group's first U.S. tour. The soundtrack features cuts by David Bowie, Kraftwerk, and New Order, the band Joy Division eventually became.

VIDEO GAME — NBA 2K8 (2K Sports)
Our favorite hoops game (for the Xbox 360, PlayStation 2, and PlayStation 3) ups the play this year with a super-cool streetwise slam-dunk contest and a Lock-On D feature. And the pro-court action remains the most authentic basketball sim available. Plus, the online mode is all net.

DVD — Pixar Short Films Collection, Volume 1 (Disney)
Many of these computer-animated shorts were shown with box-office hits like Toy Story and Finding Nemo. The company's winning formula — great CGI, even greater stories — carries over to these films, most of which clock in at less than 10 minutes. Best: the Oscar-winning For the Birds' close-knit flock and this year's Lifted, which features flustered space aliens. It's nice to have all these in one place.

COURTESY FLUSH, PLEASE — The Jim Morrison Scrapbook (Chronicle)
This hefty photo-stuffed book features two dozen removable artifacts — including handwritten lyrics, personal letters, and artwork by the late Doors singer. There's also a CD with interviews and a really awful poem by Morrison. It all adds up to bloated and pretentious attic trash.