Revenge of the Jocks 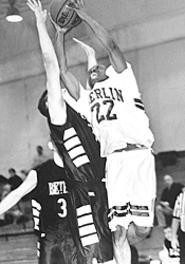 Vin Lananna, the new director of athletics at Oberlin College, has never seen a Star Wars movie. He was coaching cross-country at C.W. Post, his alma mater, when the original was released in 1977. By the time of Attack of the Clones, Lananna had won five national championships as the director of track and field at Stanford.

Stanford runners, pushed to succeed, used to tell Lananna that his coaching methods were like Jedi mind tricks. Lananna gathered the meaning, even without the benefit of watching Yoda lean on a cane. "They talk about my ability to be somewhat persuasive," he says.

Lananna's powers arrived last summer at what has been a desolate planet for college athletics. Oberlin is nationally recognized for its progressivism, its conservatory, and its high ratio of graduates who pursue Ph.D.s. Degree holders recently in the news include Willa Player (first black woman to head a four-year college in the U.S.), Michael Dirda (Pulitzer Prize-winning critic), and Liz Phair (rock star).

But sports? Oberlin's most famous jock, John Heisman, for whom the trophy is named, has been dead for 68 years. Athletics, says retired math professor George Andrews, who played football at Oberlin in the '50s, "is certainly not central to the life of the campus."

Signs of apathy were evident at a recent men's basketball game. With the campus depleted by the winter holiday, fewer than 100 fans witnessed the Yeomen defeat Bethany College, 78-70. No concessions were sold, no cheerleaders shook pom-poms. The walls of Philips Gymnasium display only three conference championship banners, all for women's lacrosse. Yet nothing has defined Oberlin's sports lethargy quite like the football team, which in 2001 finally snapped a 44-game losing streak.

Such ignominy, school officials hope, will remain in the past. In hiring its new athletic director, Oberlin showed that it is serious about improving the quality of its 22 varsity sports. Lananna, who is 50 years old and wears a silver beard under a prominent nose, is a builder, not a caretaker. He made Stanford a track power, especially in middle- and long-distance running. His cross-country teams won 15 Pac-10 titles. Craig Masback, the CEO of USA Track & Field, says Lananna is a visionary and a great salesman who never seemed to lose a recruit. "Let's face it: Stanford is not a bad product to be selling," says Masback. "But athletes are egocentric, and to bat close to 1.000 is pretty amazing."

At Division I Stanford, the goal was to win national titles. At Division III Oberlin, North Coast Athletic Conference respectability will suffice. "I don't think there are any delusions here about Oberlin being a powerhouse in athletics," Lananna says, "but certainly [it can be] one where the student athletes can have a positive experience, and it's difficult to have a positive experience when year in and year out you're just not very successful."

To foster success, Lananna will concentrate on the big picture: hiring and advising coaches, recruiting and admissions, and fund-raising. He brought along his chief lieutenant at Stanford, Mike Reilly, to sweat the details.

Oberlin wants to be more proficient at sports, at a time when other colleges and universities are questioning whether their athletic departments have become too much like pirate ships. Sports pages abound with campus tales of fraud, graft, and thuggery. In an effort to clip its jockocracy, Vanderbilt collapsed the athletic department inside the division of student life. "I like to win," the school's chancellor, E. Gordon Gee, said. "I also like to sleep at night."

The move was largely symbolic. Gee said nothing about returning Vanderbilt's portion of the $102 million that the Southeastern Conference distributed last year to member schools. Yet even the elites have been made to look at the premium they put on athletics. According to Reclaiming the Game, a book written by a former president of Princeton, recruited athletes at Ivy League and other exclusive schools are, by and large, among the worst performers academically.

Oberlin officials believed that athletics was hurting admissions, but in an altogether different way. "We were losing a segment of the population automatically that would not consider Oberlin as their place of higher education because of our poor athletic performance," says Ernie Iseminger, the vice president for development and alumni affairs.

The segment seen as slipping away is not looking for an experience like the one at Ohio State, where on football Saturdays a substantial number of students reach for body paint and beer bongs. Rather, Oberlin felt that it was losing the kids with gaudy SAT scores who also want to play varsity tennis or field hockey -- in other words, genuine student-athletes. Less than 10 percent of Oberlin students participate in intercollegiate sports; at the Ivies, the number is closer to 15 percent. Iseminger says that competitive teams are an asset, just as the conservatory and the art studio are. "The better that we become at athletics, I think, the higher caliber of student we're going to be able to recruit as well," he says. Winning should also boost giving, especially from older alumni who can remember a time when Oberlin sports didn't suck.

Of course, some on campus believe that Oberlin derives charm from its crummy athletics, that a bumbling football team connotes dedication to worthier pursuits. "Fair or not, I think it would be sad and maybe even bad for the school's reputation among certain groups of would-be students if strong varsity athletics became part of its identity as an institution," says Joanna Richards, editor-in-chief of The Grape, a student newspaper. "Pissed-off, leftist, serious academic rebels like myself might not be so initially drawn to Oberlin if it seemed to foster the predictable and offensive social environment so many other schools offer."

Lananna says the pride-in-defeat mentality is overstated and the sentiment a cop-out. "I don't know anyone who aspires to go into a classroom and get D's," he says. "You aspire to get the A. We ought to aspire to win. Now, we may not win, and you may not get the A, but the process for getting there is pretty exciting."

The journey has begun already. The 2003 football team went 5-5, its best season since 1974, back when nobody knew what a Jedi was.